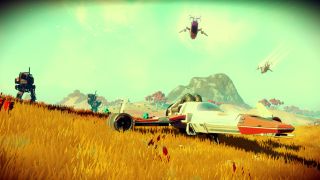 It's the game that keeps on giving: No Man's Sky, the never-ending universe simulator from Hello games is getting a new update, and this time it's all about sound and music.

No Man's Sky update 2.24 adds a fully-functioning synthesizer to the game, letting players create new tracks and sound effects for the game.

The 'ByteBeat Device' works in tandem with the game's base-building tools, and is built using “module blueprints from the Space Anomaly.” Connect it to a power supply and it'll act as a boombox with a unique, procedurally-generated song being played. That song can then be tweaked, letting players create new melodies, tempos, drum patterns and more.

Things get even more interesting with the equation simulator, which can let you play with the maths of the pre-determined songs so that they (or your own tunes) can go off in unexpected directions – just like the procedurally-generated tunes that are core to the main game.

Connect a group of ByteBeats together and they'll work in symphony, letting you build a little synth orchestra among the stars, as well as having the potential to link and sync with lighting rigs.

“Base building is a big part of what people spend their time doing in our game, and a frequent request is for the ability to add sounds and music to their construction,” a Hello Games rep said in a post.

“Our team always likes a creative challenge, and audio is one of our big passions. Over the last few weeks one of our coders got obsessed with making an audio creation tool for the community, we were so excited about it we thought it’d be a nice surprise to release it.”

After a slightly troubled launch, No Man's Sky has become one of the games of the decade, with a series of generous updates building upon the exciting foundations of the go-anywhere-in-a-unique-universe premise.