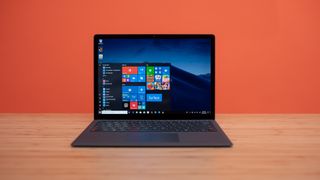 Update: A source with knowledge of the situation has been in contact to assure us that Intel has not been ditched by Microsoft when it comes to Surface products. It looks like we could see devices with a range of CPUs from different manufacturers.

This follows a number of rumors that have indicated that Microsoft could be going with AMD hardware for the Surface Laptop 3, rather than Intel – which it’s usually used in its Surface devices.

A recent rumor even suggested that the Surface Laptop 3 could come with an 8-core AMD Ryzen processor.

While Intel has been Microsoft’s processor manufacturer of choice for its Surface devices, Windows Latest has found yet more evidence that it could be switching to AMD, with leaked benchmark results apparently showing a Microsoft device running on an AMD Ryzen 5 3550U mobile processor.

Another benchmark, spotted on Reddit, shows a device by the same name as the other leak - ‘OEMMO OEMMO Product Name DV’ – which will run an AMD Ryzen 5 Microsoft Surface Edition processor.

So, what can we glean from these recent rumors? Well, it looks increasingly likely that Microsoft is going with AMD over Intel for the Surface Laptop 3, which is a big win for AMD and a big blow for Intel.

With Microsoft’s upcoming October event happening on October 2, we shouldn’t have to wait too long to find out if rumors of an AMD-powered Surface Laptop 3 are correct.