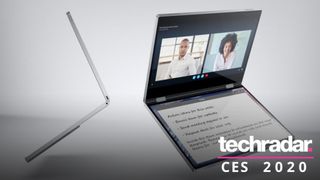 Dell has revealed a concept dual-screen device at CES 2020, while showing off a couple of further pieces of concept hardware, alongside a G5 15 Special Edition gaming laptop which features AMD’s Ryzen 4000 mobile chips.

Dell’s Concept Duet is, as the name suggests, a prototype concept which represents a glimpse of what future dual-screen devices might be like. And in this case, the Concept Duet comprises of a bold combination of two large 13.4-inch displays.

Dell notes that the Duet incorporates innovative features, and is based around ‘intuitive interactions’ with both displays and a pen.

Usability is the goal, then, doubtless along with versatility, as is the case with all these dual-screen devices. Dell didn’t make clear exactly what differentiates the Concept Duet from similar machines, but then it didn’t provide much in the way of details in this initial reveal – aside from pointing out the obvious in terms of extra screen real-estate, and the ability to be more productive and multitask more effectively.

The good news is that we’ll get to find out more soon enough, as we’re going to take the Concept Duet for a hands-on spin later today, so stay tuned to our CES coverage for that upcoming preview.

Remember, though, that this is just a concept device, so there’s no guarantee Dell will ever actually produce it.

Dell actually aired a few pieces of concept hardware at CES, including the new Alienware Concept UFO which we’ve already had a play with, along with the Concept Ori. The latter is different to the Duet in that it is a foldable device, meaning it’s one seamless screen that can fold, as opposed to two separate hinged displays (which have a slight gap between them).

In other words, the 13-inch Ori is more like Lenovo’s ThinkPad X1, whereas the Concept Duet is more akin to Microsoft’s incoming Surface Neo (although Dell’s effort doesn’t resemble a book so much, and looks more like a traditional laptop).

Other than that, the Duet and Ori are obviously fairly similar devices in terms of offering more versatility and screen real-estate, except the latter’s seamless single display offers obvious advantages in terms of, say, watching movies. Ori is also more portable – again, if the device ever sees the light of day, that is.

All of these concepts may end up being pipedreams, rather than reaching the production pipeline.

Beyond concept laptops, Dell also revealed a new G5 15 Special Edition (SE) at CES, a new take on the gaming notebook which switches to use one of AMD’s new Ryzen 4000 H-Series mobile processors (which top out at 8-cores, 16-threads).

That’s backed up by AMD graphics in the form of the Radeon RX 5600M, making the SE an all-AMD laptop, with AMD’s SmartShift technology able to dynamically shift power between the CPU and GPU as appropriate (so it can allocate more power to the GPU if you’re gaming, for instance).

The G5 laptop has a 15.6-inch screen with a Full HD resolution, and you can opt for a 144Hz refresh rate panel with FreeSync. Storage options encompass single or multiple drives, and you can run with up to a 1TB PCIe SSD backed with up to a 2TB hard disk for extra capacity.

Dell’s G5 15 SE will also offer an optional four-zone RGB backlit keyboard, and the laptop is expected to be available in April 2020 (and in terms of Europe, will only be released in the UK). Pricing will start at $799 (around £610, AU$1,160), so you’re getting a good dollop of power with those AMD components at this price level.