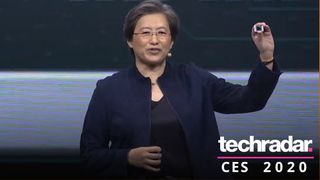 At CES 2020, AMD has revealed its Ryzen 4000 series of mobile processors, which will power its upcoming laptops.

This should worry Intel, as most laptops run on Intel processors. If AMD's Ryzen 4000 processors are as successful as its Ryzen 3000 desktop CPUs, then Intel might find its dominance in the laptop market increasingly unstable.

While we've seen laptops running on AMD processors before, they've not managed to match Intel when it comes to performance and popularity.

However, a newly-emboldened AMD, which has been on a bit of a winning streak of late, promises that its Ryzen 4000 mobile processors will change all that.

AMD's CEO, Dr Lisa Su, is confident enough to call it the "best laptop processor ever built" – and it will reportedly come with 8 cores and 16 threads.

The AMD Ryzen 7 4800U is what AMD claims is "the world's highest-performing ultra-thin laptop processor", with 8 Zen 2 cores, 16 threads and a base clock of 1.8GHz which boosts to 4.2GHz. It comes with 8 Radeon cores for graphics and has a TDP of 15W.

It's also in the Lenovo Yoga Slim, which Su claims is the "world's thinnest and lightest 8-core laptop".

AMD also showed off charts showing the performance gap these new processors offer over Intel's Ice Lake processors, including a huge 90% increase over the Intel Core i7 1065G7 in the CInebench R20 nt benchmark.

While Intel is expected to show of its Comet Lake mobile processors at its own event at CES 2020, AMD has stolen some of its thunder by announcing the details of its Ryzen 4000 series.