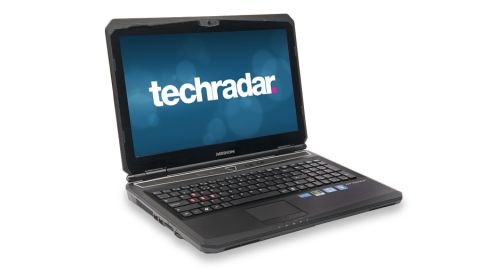 At a shade under £1,200, the Medion Erazer X6819 might not seem like the greatest bargain on the planet, but when you take a look at what this machine has to offer, it's obvious the price could easily be much, much higher.

As a gaming machine, the Erazer packs in some of the most advanced laptop technology. Because video games are so demanding, specifications have to be up to the task. But we get the impression that if this carried an Alienware, Qosmio or MSI logo, you could see another £500 added to the price.

Part of its appeal is that the Erazer doesn't really look like a gaming laptop. There aren't racks of LED lights, stripes of colour or an excess of chrome overlay. Instead, the Erazer is a solidly black, conventional laptop with an isolation-style keyboard, numeric keypad and a relatively small touchpad.

Medion has put the emphasis where it counts, instead - on the inside. The Erazer is powered by the Core i7-2670QM processor which was launched towards the end of last year and is one of the Intel's fastest laptop chips.

On top of this, Medion has packed the Erazer with a whopping 16GB of RAM. Most conventional £600 laptops still only come with 4GB, and the difference was clear as soon as we loaded up our benchmark tests. The Erazer screamed through the performance part of our testing easily and as soon as we loaded up some gaming, the Nvidia GeForce graphics card joined in.

The Erazer carries a GeForce GTX 570 GPU that offers an extra 1.5GB of dedicated video memory and is powerful enough to play even the latest games on the highest detail settings. Even if you're not a gamer, you might consider the Erazer for desktop publishing or editing purposes. The power under the hood means this laptop works just as well for music, photo or high-definition video editing.

The Medion Erazer has a matte (non-reflective) screen with a 1,920 x 1,080 pixel resolution for 1080p gaming or movie watching. The picture is wonderfully crisp but what really impressed was the level of brightness we got.

The other thing you get for your money with the Medion Erazer is connectivity. There are four USB ports, two of which are the faster USB 3.0 format as well as four 3.5mm jacks for headphones and microphones. Medion has also included HDMI, eSata, VGA and Ethernet ports next to the power socket on the back of the laptop. And then there's the Blu-ray DVD/RW optical drive too.

Where the Erazer falls down - like other gaming machines - is portability. With 389 x 264 x 52mm dimensions and a 123-minute battery life, we doubt you'll be taking this laptop on a road trip across the country.

However, as a value-for-money gaming machine, the Medion Erazer X6819's appeal is undeniable.