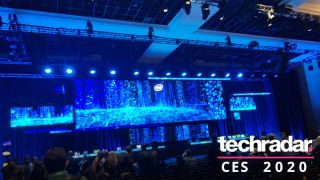 Almost immediately after AMD gave Intel a proper thrashing at its CES 2020 press conference, Intel had its own keynote. Only, Intel spent nearly an hour talking about enterprise solutions revolving around everything from traffic control to sports until, finally, Gregory Bryant, Intel's client computing head, came on stage to talk about actual consumer products.

The good news: Bryant did give a brief update on the current state of Project Athena: specifically that, as of CES 2020, 25 new laptops have passed the verification necessary to be included in the program. That means longer battery life and faster wake times, but because this program is already old news, it probably doesn't mean much to you, at least beyond the fact that new Chromebooks from Samsung and Asus are included for the first time.

We did get an update on Project Athena's 5G integration through Intel's partnership with Mediatek. We've already heard that this partnership is a thing and that Intel was planning on getting 5G-enabled laptops out in 2021. Bryant updated us, saying that 5G-enabled chips will be heading to hardware partners in Q3 2020, so it looks like Intel is still on track to make that goal.

Near the end of the show, Intel gave us a sneak peek into an actual new product: Tiger Lake, the next (11th?) generation of mobile Ultrabook-class processors. These processors are notable primarily because they'll be the first consumer-class processors that will feature Intel Xe graphics. These integrated Xe graphics will, according to Intel, be twice as powerful as the Gen11 graphics in comparable Ice Lake processors.

Intel didn't share any specifics about these chips, beyond the fact that they'll be available by the end of the year. We expect to learn more at Computex 2020.

We also got a super brief look at the first discrete Intel Xe graphics processor, code named "DG1". It was shown on stage running Destiny 2. However, it should be noted that this was a mobile-class graphics processor, rather than a full desktop graphics card. Which leaves us to wonder: what is Intel doing in the desktop space?

In the weeks leading up to CES 2020, we kept seeing leaked benchmarks and other assorted rumors pointing to Comet Lake-S desktop processors. Everything kind of led us to believe that Intel would at least give us a taste of what these processors had to offer, but instead desktop was completely abandoned.

It might be cool that Intel is getting ready for its next generation of Ultrabooks with Tiger Lake, and that it teased 10th Generation H-series processors earlier in the show, but the last desktop lineup from Intel came out way back in October 2018. At this rate, we don't even know if Intel will have a 10th generation desktop lineup before AMD Ryzen 4th Generation hits the street.

That's not to mention graphics. The hype for Intel Xe graphics has been building up for a couple of years now, and when we heard that they would be at CES, we would have thought it'd be more than just a laptop running Destiny 2 – literally any gaming laptop can do that. Instead, we'll just have to keep waiting to see how Intel will break into the graphics card world, but it might be a long time before we see a compelling desktop graphics card from the company – if we ever, in fact, do.