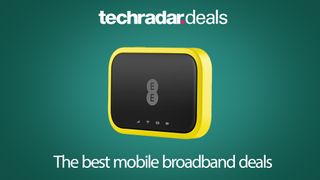 You've got your internet to cover you when you're home...but what about when you're out? That's where mobile broadband comes in, providing you with a steady internet connection on the train, in the park or just down your local pub.

Very simply (as you've most likely guessed from the name) mobile broadband is internet you can take on the move. Most commonly, it comes as a hub you can connect your phone, laptop and other gadgets to, however there are a few different options.

Dongles, routers, SIM cards - all servicing different needs. And with PAYG options, contracts and simply big upfront spending plans, there is a lot to consider when investing in any mobile broadband deals.

Of course, Mi-Fi isn't for everyone and anyone with a big data mobile phone deal or SIM only deal will likely find mobile broadband redundant with tethering abilities and anyone needing it for their home will find 4G home broadband to be a better option.

However, for parents trying to keep kids entertained on long trips, people trying to work on trains or people who simply travel abroad a lot, mobile broadband deals could well be a logical option for you.

What is mobile broadband and how does it work?

Mobile broadband (commonly known as Mi-Fi) is in essence a portable internet router. It can come in multiple forms - dongles, hubs, SIM cards etc - and simply provides you reliable internet when you're out and about.

Unlike regular broadband deals or even 4G home broadband plans, the major pro of mobile broadband is its ability to be taken on the move. It doesn't (in most cases) require a plug or any power and most options are small and portable.

Depending on what kind of option you choose, you can use it tether multiple devices or even get unlimited data on the move.

Three Huawei 4G Mobile Wi-Fi | £0 upfront | 24 month contract | 20GB data | £10 a month
The first thing you'll notice about this offer is its temping name - the Huawei E5573bs-322 - if that doesn't captivate you, we don't know what will! While there is a host of different packages at different price points, we feel the best option is the 20GB data package. It is one of the cheapest options and comes packed with more data than most. However, it is a 24 month contract so some might want something shorter.View Deal

Three PAYG Huawei 4G Mobile Wi-Fi | £89.99 upfront | valid for 24 months | 24GB data
Don't want to sign up for a contract? You don't have to. With this offer you're getting the exact same hub as above but without being tied into monthly payments. While there is a few PAYG options, we feel like the most expensive one is worth the investment. It comes with 24GB of data and stays valid for 24 months. (once you click through, you'll find PAYG at the bottom of the list).View Deal

EE 4GEE Wi-Fi Router | 24-month contract | 30GB data | £20 a month | £30 upfront
Likely the option most people will want from EE, the 4GEE Wi-Fi router is affordable, portable and offers impressive download speeds. The best deal around is this 30GB for £20 a month offer however you're tied in for 24 months. EE has a load more options with this router if that doesn't quite work for you.
View Deal

EE Netgear Nighthawk M2 | 24 months contract | 30GB data | £28 a month | £100 upfront
In a world where routers are called "4GEE" and "E5573bs-322", something called Nighthawk brings us hopes for something impressive. And with downloads speeds up to 2GB/s, the Nighthawk is perfect for those needing something fast. It's just a bit more expensive than most mobile broadband.
View Deal

O2 Pocket Hotspot Pro Netgear M1 | 36 month contract | 75GB data | £39.84 a month
O2 has one offer that stands out above the rest, its Netgear M1. This has two appeals - its speed and its customisation. With speeds that can reach 1GB (incredibly fast if you were wondering), this is one of the speedier options available. The other great benefit is the customisation. You can choose how much data you want, the contract length and even the price you'll be paying.
View Deal

O2 Huawei 4G Dongle | 24 month contract | 3GB data | £16.55 a month
Sometimes all you need is a dongle! If you just need to do some work on the go on your laptop, this will likely be the best option. You simply plug it in and you're connected. And considering prices start from £16.55 a month, it is also one of the cheapest mobile broadband options around.
View Deal

Vodafone K5160 Dongle | 1-12 month contracts | £0-30 upfront | 2-110 data | From £15 a month
Another in a long line of top-notch names, who doesn't want a KG160 dongle? While this can only be used for your laptop, the amount of options is outstanding. There are 1-month contracts, big data options, cheap plans and even PAYG deals - perfect for just a bit of work on a commute.
View Deal

Vodafone R218 Mobile Wi-Fi hotspot | 1-12 month contracts | £0-35 upfront | 2-110GB data | From £15 a month
Need to connect more than just your laptop? Vodafone also offers a mobile broadband hub to help you get online on the move. It offers connectivity for up to 10 devices and like the option above, has plenty of space for customising how you want your plan to look.
View Deal

Can I get 5G mobile broadband?

Yes you can! Despite 5G still being quite a new introduction to the world of Wi-Fi and phones, you can now get 5G mobile broadband deals. EE is the first network to jump on the trend, offering up its 5GEE router.

This can be used either as a router at home or on the go. However, keep in mind that you may need to have 5G capable devices to use it, read through EE's terms and conditions to make sure you can make use of its 5G router before buying.

What kind of mobile broadband packages are there?

While all mi-fi offers the same thing - internet on the move - it does come in a selection of different devices and packages. The main ones are:
- Hub/router: This is the most common form mobile broadband comes in and the one you'll see most frequently above. Essentially, it's a hub you can carry around with you on the go. Due to its ability to connect a number of different devices at one time and its usually higher speeds, it tends to outrank other choices.

- Dongle: Dongles for mobile broadband have one major selling point - they're cheap. However, they are quite limited in what they can do. You can plug them into your laptop when you're on the go and get access to the internet that way.

- SIM-cards: Finally, just like phone contracts you can just get a mobile SIM only plan. Most new laptops can take these making them an excellent solution for working on the go.

How is mobile broadband different from Wi-Fi?

There are a few key differences between the two. Firstly and most obviously, with broadband deals you need to have a landline and go through the set-up process. That means that broadband can only be installed in a home, office or stable location.

Mobile broadband on the other hand can be taken on the go and requires no set-up to get started. While Mi-Fi will remain faster than ADSL (slower broadband) in most cases, it will struggle to match fibre in its consistency and speed.

If you can get a home broadband deal where you are, we would advise that as your main Wi-Fi connection due to its affordability, consistency and overall performance. Can't get it where you live? Mobile broadband could be the perfect option.

Can I use mobile broadband at home?

While you can use mobile broadband at home, a regular broadband package will perform much better (see above). However, not all homes can get Wi-Fi or you might just prefer a more flexible internet model.

Mobile broadband works off of 4G (and depending on which deal you choose, 5G) connections instead of the cables regular Wi-Fi uses. That means that mobile broadband could well work as home broadband...if you have good 4G signal.

If the signal is poor, you will find it to be a frustrating model for your internet plan.

What alternatives are there to mobile broadband?

There are a few alternatives to mobile broadband depending on what you need it for:

Mobile phone deal/SIM only plan:
Phone plans have come leaps and bounds in recent years in terms of their data caps. With options offering unlimited data or just large plans, you can easily tether a few devices off your phone and skip the mobile broadband. This can however get quite expensive quite quickly with big data plans costing a fairly large price.

Broadband plans:
Just need internet in your home? Regular broadband will most likely be a better option for you. In most cases, it will be cheaper, faster and more reliable, if you don't mind the longer contracts and set-up fees of course.

This isn't so much a simple yes or no answer. With so many different broadband deals out there ranging from painfully slow to blisteringly fast, mobile broadband falls somewhere in the middle.

It will easily out-perform the lower end deals but as you get into the faster fibre category you will find it losing out. Mobile broadband also requires strong 4G connection meaning speeds will change depending where you are, regular broadband on the other hand will more or less stay the same.

Still want more options? Then head to our main broadband deals guide for all the best tariffs out there right now.