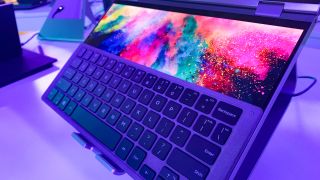 At CES 2020, foldable computers were the name of the game, but there's one thing tying them all together: Windows 10X, and we just got a glimpse at a cool feature.

Now, when we went hands-on with the Dell Concept Duet, Dell had a little magnetic keyboard that the rep attached to the screen, making it function like a real laptop. However, now that the Windows 10X emulator has been released by Microsoft, the folks at Liliputing discovered the Wonder Bar.

This will essentially sense when a keyboard is attached to one of the screens, and a unique UI will pop up, allowing you to interact with your content. Imagine the Touchbar on the MacBook Pro, but turned up to 11.

Not only will there be plenty of Windows 10 apps that will offload some of the UI functionality to this Wonder Bar, but it will actually be large enough to offer a virtual trackpad, as well as video playback. In this way, it kind of reminds us of the Asus ZenBook Pro Duo with its half-screen above the keyboard.

We here at TechRadar haven't quite had the chance to play with the emulator build of Windows 10X yet, but we can only imagine the possibilities that the Wonder Bar will enable. The secondary display on the Asus ZenBook Pro Duo was a cool concept, after all, and when support for this kind of thing is baked into Windows, there should be a wide range of software developers that will embrace it.

The Surface Neo and Duo are still a ways off, but the more we hear about what Windows 10X will be able to do, the more excited we are to get our hands on it. If you can't wait for the release, you can download the emulator now - you'll just have to join the Windows Insider Program to do it.