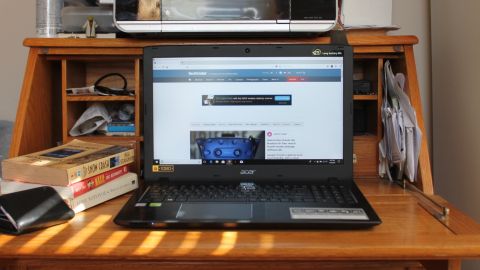 The E 15 isn’t some rattling jalopy (though it may look it); this laptop is a solid performer capable of a few surprises.

Here’s how the Acer Aspire E 15 performed in our suite of benchmark tests:

Despite its rather pedestrian 8GB of RAM, the E 15 is an able multi-tasker. Our anecdotal stressing of the device – running YouTube with multiple programs and tabs open – backs up its great PCMark 8 Home score: the E 15 stays cool, but never freezes.

Credit has to be given to the E 15’s shiny new Core i5 for its solid scores.

It helped Acer’s worker bee grind out a better Cinebench score than the Inspiron 15 7000, an actual semi-pro gaming device.

The Inspiron 15’s 3DMark scores blow the E 15’s out of the water, but Dell’s 15 inch laptop is built for gaming.

That said, the E 15 is a fine casual gamer (at least from a performance standpoint) and its 10,000-plus Sky Diver score verifies that.

The E 15’s battery achieved 4 hours and 40 minutes of run-time on PCMark 8’s battery test, about average for this class of laptop. Under less strenuous testing conditions though, the battery excelled.

When we played Guardians of the Galaxy on a loop at 50% volume and brightness, the E 15’s battery lasted nearly half a day.

If only the E 15’s screen loved movies as much as its battery does. Regardless, you’ll be able to see this laptop last you on nearly any flight within the continental US, western Europe and Australia.

The E 15 isn’t destined for coffee house tables or the desks of television newscasters. No one’s buying it for its frame and paint job.The E 15 is a no-nonsense, performance-first laptop that’s easy to upgrade and ready to hook up.

And, non-nonsense, performance-first laptops are perfect for offices and schools. At its price, the E 15 is easy to fit into a given  budget and feature-packed enough to justify. Its bulk and weight may be an issue for folks who need a device for presentations, but as we’ve stated, it feels lighter than it is, and is slim enough to fit into a backpack.

All told, for those who need a portable, reliable, Swiss-Army knife of a laptop should give the Acer Aspire E 15 strong consideration.