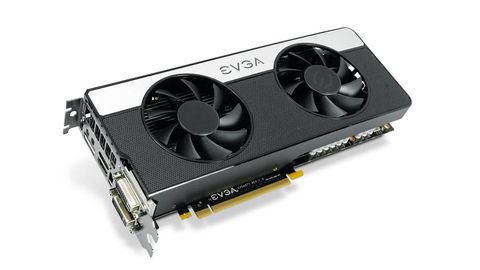 Hello, and welcome to another edition of Wildly, Offensively Expensive Graphics Cards. Excuse this burlap sack I'm wearing, we've had to cut a few corners in light of the sheer opulence of all the top end GOU's we've been testing.

After all, this is Nvidia's most powerful iteration of the new Kepler architecture, pushed even further than its reference GTX 680 - a card so powerful only AMD's HD 7970 can look it in the eye.

Does that mean we have another fastest graphics card ever? Well, sort of.

Like the reference GTX 680 compared with AMD's vanilla HD 7970, this EVGA offering certainly wins the impressive stats war against its closest rival from the red camp, Sapphire's HD 7970 Vapor-X.

When Nvidia's GPU Boost kicks in all the way, this card runs with a core clock of 1,167MHz (around 100MHz quicker than the reference card and Sapphire's boosted HD 7970) and memory at 3,104MHz. That's 6,208MHz by Nvidia's conventions. You won't find bigger numbers from an AMD card, but that's chiefly because the two differ so significantly in architecture.

Nvidia's 1,536 CUDA cores belie an absence of shader cores - an indication that Kepler is to Graphics Core Next what Stickle Bricks are to Lego, just as compute shaders can't be equated to CUDA cores with particular accuracy.

Sadly we used up all the party poppers when the reference GTX 680 and HD 7970 GHz edition went above 30 frames, but to go into the lead is mighty impressive. It comes down to intelligent boosting when the card's under strain, and relaxing down into an idle state when there's nothing taxing to render on-screen.

Just a few generations ago, if you told a card to run at 100MHz beyond its factory core clock, it'd stoically maintain that number whether you were trying to run Crysis at the IMAX or draw cats in MS Paint, which meant it could get quite warm (read: grotesquely melted). With GPU Boost, the card knows it doesn't need to run overclocked values when they're not needed, and in this case, drops its power usage from 195W to an idle 15W. You're welcome, environment.

It means the card leads a less rugged life, too. But before we geek out about idle states too much, let's make it clear that this EVGA GTX 680 Superclocked doesn't offer a significant advantage over Sapphire's similarly priced HD 7970 GHz Edition with the Vapor-X cooler. In fact, at 1080p the Sapphire card has it beat.

Of all the games we tested with both cards, only Batman: Arkham City and DiRT 3 favoured the EVGA silicon. At 2,560 x 1,600 it claws a bit nearer the Sapphire's pace, but the winner is clear. A lot of this comes down to driver support, and which games play nice with certain manufacturers, but the fact remains that despite those impressive specs, Sapphire's Vapor-X has this one pipped. Just.