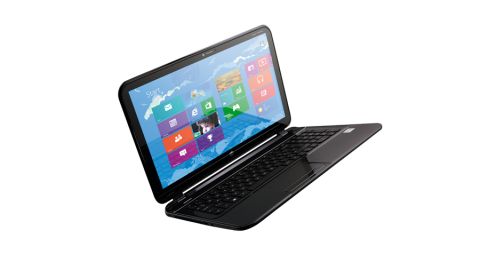 Mainstream laptops are really starting to impress these days - not only are you generally paying a decent price, but you're also getting something truly excellent for the money.

The HP Pavilion Touchsmart Sleekbook 15 is just over 2cm thick, but don't be fooled into thinking it's an ultraportable; it's definitely a little too heavy for that at 2.1Kg - not the best for carrying around every day. Mind you, for moving from room to room at home it really wouldn't pose you a problem - it's hardly a brick.

It does, however, seem a trifle heavy when you consider you do not get an optical DVD/Blu-ray drive. As a result it does have something in common with the plethora of more expensive ultraportables on the market. If the lack of that specification disappoints you, then perhaps consider getting an external optical drive - internal ones are becoming something of a rarity and you may be unduly restricting your choice.

In addition to the slick, glossy design, there are two other key specifications to talk about. The first is the bright 15.6-inch 10-point touchscreen. We really liked the vibrancy of the display, while the touch was of good quality with plenty of responsiveness.

We really wish we'd had more laptops like this around the time that Windows 8 launched. It's only now that people are able to walk into stores and have a decent choice of Windows 8 touchscreen laptops.

The second key specification is the dual-core AMD A4-4355M 1.9GHz processor which not only boasts the usual CPU part, but it also features Radeon HD graphics cores on the same chip. It's an entry-level processor in terms of raw performance, though thanks to the graphics on board it can play a reasonable number of mainstream games.

But if that's of interest then be warned - it's not powerful enough for serious 3D gaming and therefore some users might to rule it out because of that. However, the processor is perfectly fine for most mainstream tasks. We wouldn't want to do any serious video editing on it, though.

In terms of other specifications, you won't be disappointed. There's a huge 8GB of memory, so you can handle plenty of concurrent tasks, while you also get an equally huge 1TB of storage - that's far more than you'll probably ever need and is plenty for music, videos, photos and your apps. And for entertainment, the powerful Altec Lansing speakers are enhanced with Dolby Advanced Audio to maximise the power of music and movie soundtracks.

We thought the keyboard was of terrific quality and you won't be disappointed when typing assignments or letters. The trackpad and mouse buttons were also decent although you will find yourself increasingly using the touchscreen. You might not think so, but you will; it just makes sense.

As for battery life, up to eight hours is promised. You won't get that. Instead, you'll almost certainly be in the range of five to seven hours depending on what you're doing. That's still pretty impressive for a laptop of this nature and while we very much expect you'll use it near a power source, anyway, it will perform admirably for a decent length of time on battery power.

Connectivity is plentiful, with an SD card reader, Ethernet connection for wired internet, Wi-Fi for wireless and a webcam. There's also a USB 2.0 port plus two USB 3.0-capable ports, as well as HDMI for connecting to an external display. All pretty much what you'd expect, although some may bemoan the lack of Bluetooth for tethering to a phone's internet connection.

One thing that did disappoint us was the amount of extra software on the device. It was just a little too much and we're disappointed that vendors still think littering the Start screen, desktop and desktop taskbar with apps is a good idea. We know it earns them money and we know they think it makes them look different to other PCs in the shop. But all it does is give the impression that somebody has already been on your PC when you take it out of the box. We found that most of this software was useless so we chose to uninstall most of it.

The specification list we saw for this laptop said it wasn't a desktop replacement. But, the lack of DVD/Blu-ray drive aside, it's hard to see what this lacks that you would want from a machine you were replacing a desktop PC with. Yep, so the processor is a little slow, but that's about it.

The bottom line is that, if you buy this laptop, people will be amazed you didn't spend more on it. It looks good, has stacks of memory, runs well and has that all-important touchscreen. We think you'll be impressed with it, too.