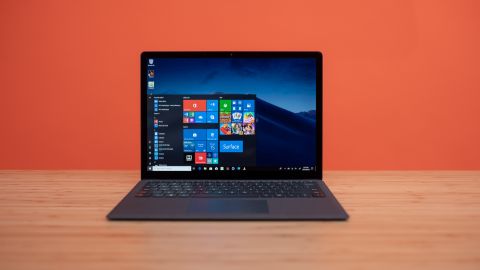 From top to bottom, the Microsoft Surface Laptop 2 is a worthy follow up to the original device. This successor vastly improves the laptop’s power profile. And, while it doesn't include tangible design changes, it ultimately achieves the purest Windows 10 experience on a laptop.

When Microsoft released the Surface Laptop a couple of years ago, we were surprised with its first ‘traditional’ laptop. And, we had to ask: “why release a laptop that’s right down the middle, when you’ve made a name for yourself as a tastemaker in touch-based mobile computing?”

Microsoft’s Surface sales keep getting stronger with a 21% leap

Here is the Surface Laptop 2 configuration sent to TechRadar for review:

The starting model of the Surface Laptop 2 will set you back $999 (£979, AU$1,499). This configuration comes with everything you see listed to the right, but with a limited 128GB of SSD storage.

So little has noticeably changed as far as the design. That is, short of a major new color option – yes, the Surface Laptop 2 has an all-black color variant now that looks absolutely beautiful, and feels fantastic to boot.

The display hasn’t changed since the original model, either. Not that we’re not complaining, since the original Surface Laptop did have an incredible screen. The Surface Laptop 2 has blacks that are just as deep and reds that are just as sharp. The swift touch response is also an advantage. If you have a lot of work to do, you’ll fall in love with the tall 3:2 aspect ratio, but you’ll have to deal with some black bars while watching traditional 16:9 video content.

Microsoft doesn’t include its $99 (£99, AU$139) Surface Pen stylus, which is unfortunate because it is essential if you were to take full advantage of the touch display.

Microsoft claims to have made the Surface Laptop 2 keyboard quieter than its previous model, and we can confidently say that this has to be among the most silent keyboards we’ve ever tested. Our coworkers couldn’t even hear our typing in a quiet open-office environment.

The fact that Microsoft has managed this while maintaining impressive force under our fingers is worth lauding. That said, the spacing of the keys could be a little narrower for more comfort.

As for the touchpad, it’s a fine tracking device that’s spacious, smooth and responsive. The inputs are made much nicer by the Alcantara fabric that surrounds them, as it’s simply something more pleasant to rest your hands on than hard, cold aluminum.

However, maybe Microsoft hasn’t iterated enough on the design. The second generation of this laptop is still doesn’t have Thunderbolt 3, much less USB-C 3.1. You’re still stuck with a single USB 3.0 – yes, not even the traditional USB port can support the latest USB 3.1 standard – and a Mini DisplayPort.

The Surface Laptop 2 chassis has enough empty space so there’s no excuse for it to be so light on ports. Plus, the ports that are there aren’t up to 2019 standards. By comparison, the 13-inch MacBook Pro has four Thunderbolt 3 ports, and the Dell XPS 13 2018 has two – on top of a microSD card reader and a third USB-C 3.1 port. The kicker? Both of these laptops are smaller than the Surface Laptop 2.