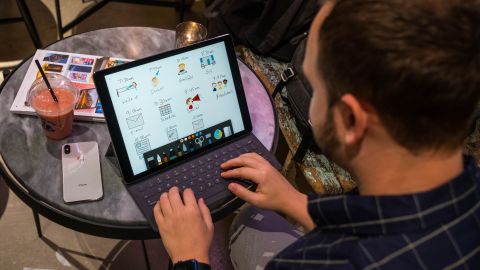 The iPad Pro 12.9 is the tablet equivalent of a gaming laptop. It’s incredibly powerful, undeniably fast, and a visual treat every time you turn on the noticeably improved screen. iOS 12 gives it a few multi-tasking powers. It’s big to carry around everyday and rather expensive compared to the more mainstream iPad Pro 10.5 that has same specs. It’s very easy to love theiPad Pro’s expansive size, and to also wish it was smaller.

The iPad Pro 12.9 is a computer for a generation of users who don’t know what a computer is, according to Apple’s iPad commercial; to everyone else it’s a supercharged tablet, especially for those looking to replace their aging laptop with a traditional 13-inch screen.

Apple’s lofty marketing pitch is no longer an unreasonable one in 2018. The iPadOS update makes trading in a dated computer for an iPad Pro more feasible for a lot of people thanks to its tablet-focused features, and the 2017iPad Pro 12.9 is one of the best ways to experience Apple’s software refresh.

There’s a lot to like here. Compared to the iPad Pro 12.9 (2015), it has a brighter, more colorful, and extra-anti-reflecting 12.9-inch touchscreen. This display – in 2017 the best we’d seen in a tablet – is your touchscreen Mac, essentially. In case you’re wondering how Apple is competing with the Microsoft Surface Pro and countless touch-friendly Windows laptops, this is it.

Inside both this iPad Pro 12.9 (2017) and the smaller, simultaneously launched iPad 10.5, is a fast A10X chipset with enough of Apple’s processing grunt to match most laptops. It has a hexa-core CPU and 12-core GPU, which simply means you won’t have any problem with the new multitasking experience once you update to iPadOS. The Apple Pencil, Smart Keyboard Cover and, on the 12.9-inch version, a beefy 10 hours of battery life with fast-charging capabilities round-out Apple’s powerful mobile suite.

That large, color-rich screen and benchmark-setting horsepower come at a cost, of course. The new iPad Pro 12.9 is incredibly expensive, more so than any other contemporary iPad – it’s almost two and a half times as much as the entry-level iPad 9.7 (2017), which we love. The Apple Pencil and Smart Keyboard Cover are additional purchases, too. We also found the 12.9-inch iPad Pro unwieldy at times compared to the iPad 10.5, which sports slightly smaller bezels along its sides. You may be envious of its tighter dimensions.

Everything else about the 2017 iPad Pro feels good, even if it doesn’t appear that Apple has made a lot of changes until you dive into it and start touching the Apple Pencil to the latency-reduced touchscreen. Its performance is stellar, and the App Store remains the best reason to own an iOS device over an Android. It’s just a better tablet ecosystem.

That’s still cheaper than a MacBook, but not by much. The MacBook Air, still on sale, starts at $999 (about £949, AU$1,499). It doesn’t have that beautiful Retina display, the tablet sleek form factor, or the Apple Pencil compatibility you get with an iPad Pro. It does, however, run macOS High Sierra and comes with a keyboard you can more easily rest on your lap – if you don’t mind dated hardware and design. Apple’s computing future seems to belong to the iPad.

Too rich for your blood? Want a significantly cheaper iPad without several Pro-level features? The new iPad 2018 launched earlier this year and it brings Apple Pencil support to a much cheaper iPad at the 9.7-inch screen size. And if you want something even newer, Apple is poised to launch the iPad Pro 2018, with rumors pointing to a bezel-reduced display and TrueDepth camera (and no notch).

The iPad Pro 12.9-inch display is the Big Gulp of iPad screens – it sometimes seems ridiculously large, but you’re happy to indulge anyway. And indulge you will, in brighter, more fluid multimedia with amped-up vibrant colors compared to any prior iPad, even if you may not notice the differences outside of a side-by-side comparison other than to say “This looks really good.”

Yes, on the spec sheet it has the same 2732 x 2048 resolution as the iPad Pro we got two years ago. But what’s new is how smoothly everything moves, how colorful it all looks, and how much brighter it can get, not how many pixels you’re never going to count.

Here’s what matters: the new iPad Pro is noticeably more responsive, whether you’re speedily shifting through iOS 11’s multitasking menus or drawing with the Apple Pencil. The screen exhibits less latency thanks to what Apple calls ProMotion technology, offering faster refresh rates of up to 120Hz. The trick here is that the screen refresh rates are variable to match the content, adjusting automatically to preserve battery life. It keeps up with you when it has to, and intelligently slows down when it’s not needed.

If you look closely enough at the iPad Pro 12.9 and the first-gen version you’ll notice other differences, like a wider color gamut and fully laminated screen (the first model didn’t have this display feature). You also get the debut of Apple’s True Tone display at the 12.9-inch size, which helps the screen to match the lighting environment around you.

The laptop-rivaling 12.9-inch screen is the reason you’re buying this extra-large iPad Pro over the flagship 10.5-inch version. It’s the best way to multitask and see ‘the whole picture’ on an Apple device outside of the Mac family.

Multitasking between documents, spreadsheets, and emails on the iPad Pro 12.9 leads to the realization that everything is right in front of you, with less need to scroll compared to every other tablet you’ve used. “Wait, I can see all of the cells in this spreadsheet at once?” That’s a great feeling. As much as the new iPhone X all-screen display is a nice jump in size, scrolling through Numbers can be a pain, and we never had that feeling with this big iPad.

When it comes to doing meaningful tasks, there’s no tablet better than the iPad Pro 12.9 thanks to its large-screen real estate. It’s a joy to have, and a handful to hold. It’s portable, sure, but it’s what we’d call the tablet equivalent of a gaming laptop. Constantly toting it outside of the home or office can be a little taxing at times.

It’s 6.9mm thin and weighs 677g (1.49 pounds), so it’s slim and light on its own. But we found that with the Smart Keyboard Cover attached, unfurling the keyboard isn’t as easy as with the 10.5-inch iPad Pro and its smaller keyboard cover – there’s an extra flap to the foldable fabric keyboard at this size. There’s also still no place to put the Apple Pencil, so hold onto that stylus – remember, it’s expensive.

You can buy the official iPad Pro leather sleeve, which has a slot for the Pencil, but with both the iPad and pencil bed width added the tablet is too big for many compact laptop bags (yet our 13-inch MacBook Pro fits in the same sling bags). It’s not very portable. Worse, fitting the iPad Pro with its Smart Keyboard Cover attached into this leather sleeve is too snug. You’ll need two hands and muscle to slip it all in and out of the sleeve. The iPad is built to be mobile, and this flies in the face of what we want. You just can’t completely win at these dimensions.

What the iPad Pro 12.9 design could have used were the shrinking bezels of the iPad Pro 10.5 – and then some. New iPad Pro 2018 rumors point to an iPhone X-like tablet design, without a home button, in an effort to increase screen real estate. iOS 12 gave us the biggest hint of this yet, with iPhone X-matching gestures for Control Center (swipe down from the top right side) and return to home (quickly swipe up from the bottom).

We’re in favor of that gesture unification across the iPhone X and iPads, but an actual new iPad Pro for 2018 is likely several months away. And when it happens, hopefully we’ll see more colors at the iPad Pro 12.9 size. We're limited to silver, space gray and gold – rose gold remains exclusive to the 10.5-inch size for now.