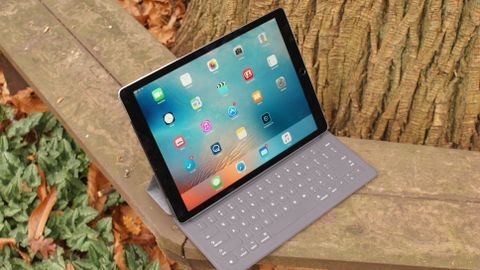 A brilliant iPad that takes the devices into a new realm. We've loved using it, but just make sure you're ready for the larger size and weight.

The iPad Pro review was one that I was really dreading writing – but also one I was the most excited about in a while.

The issue was this: what is the big iPad Pro for? Is it a genuine laptop replacement? Or is it nothing more than a larger tablet from Apple? And now we've got the iPad Pro 9.7, is this tablet too big?

It depends what you see a tablet as. For some, it's a device that sits on the sofa with you, and you sometimes idly think about getting a keyboard for it so you could do some writing on the go. For others, it's a laptop that packs a detachable screen for portability.

The former scenario is where iPads (and most Android tablets) sit. The latter is more the domain of Windows devices, where the operating system and hardware collide with varying results.

This also isn't the iPad you'll be able to buy any more - there are a few newer iPad Pro models at this point, which come with an improved processor and much better screen technology, while preserving the impressive media capabilities and expansive screen.

Apple doesn't seem to be pushing the iPad Pro 12.9 into any particular market though – it's designed to be a media hub, a decent word processor, a creative design tool, and then anything the app world can dream up besides.

It's possible to use it as an enterprise device too, but there's a lot here that inches it enticingly towards the consumer world.

To many, this is a direct rival to Microsoft's Surface Pro 4, but in reality the two devices are coming at the laptop replacement issue from different angles. The iPad Pro is designed for the casual user, one who doesn't need a computer all day long. It's not a MacBook Pro 2016 with a detachable screen – iOS 10 doesn't have macOS Sierra capabilities, and even the iOS 11 update isn't going to make much of a difference in that respect.

Microsoft's device is more for those who need to massively multitask all the time, using dedicated desktop applications to get everything done.

In terms of cost, well, for an Apple device it's actually less than you'd expect. Of course, I'm not saying that you should accept a higher price because it's an iThing, but I was expecting this to tip into a much higher bracket.

You may be able to find it on discount throughout 2017 or in third-party resellers, with pricing in the US taking $100 off the top at some stores.

The iPad Pro could be a lot of things to many people - including professional users, considering the amount of business apps in the App Store. To some, a great sofa pal. To others, a brilliant hybrid device that enables them to flip effortlessly from sketching to movies to typing reports on the go.

Is it good enough to usurp the need for a MacBook Air? Could you ever get by just using this tablet and the optional accessories around it, or does it need to be part of a larger family – a device that's perfect for certain situations but gets relegated when it's time for proper work?

There was only one way to find out – force myself to ditch the laptop and try to write this review on the Pro (and you can see the results below). While that wasn't as easy as I'd hoped, I've found a lot of use for the iPad Pro 12.9 in day to day life.

Snagging the 2015 model of the 12.9-inch iPad Pro makes much more sense from a financial perspective, as the price has gone down since the release of the 2017 model. Here's a look at where today's best prices lie.

If you get the older model, you will save money. Plain and simple. However, for as much as an extra few hundred dollars or pounds, you'll treat yourself to the new model's faster internals. Here's a look at today's best prices of the latest iPad Pro 12.9-inch.

Next Page Design and screen