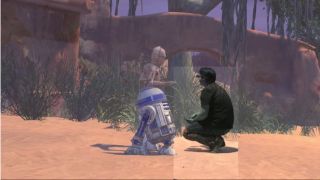 In case you needed some more proof that we're truly living in the future, this year, Lucasfilm's Industrial Light and Magic (ILM) is working to put you inside your favorite films to experience them for yourself with VR.

George Lucas created ILM with one goal in mind, to make Star Wars unlike anything that had come before it, and nearly 40 years later, it continues to inspire awe and wonder. ILM's continued work outside of George Lucas's films include the Jurassic Park series, Avatar and the Pirates of the Caribbean films.

With a new set of Star Wars films on the horizon, Lucasfilm, Skywalker Sound and ILM have created ILM Experience Lab (ILMxLab,) a new division dedicated to completely enveloping you in its films. USA Today reports that the new arm will debut with its Star Wars experiences later this year, possibly before the release of Star Wars 7 in December.

ILMxLab aims to revolutionize the way we interact with film. In the YouTube announcement video, the new division's creative director, John Gaeta said, "we're entering an age of immersive entertainment where it is possible to collapse the walls that separate us from story experiences."

A galaxy not so far far away

The video itself shows ordinary folks from our galaxy interacting with our two favorite droids in a galaxy far far away, C3PO and R2-D2, via an Oculus Rift headset and a sensor-stacked iPad to navigate through the virtual world. It also showed someone petting, yes, petting a velociraptor, which is only a few steps crazier than Chris Pratt racing the intelligent predators with his motorcycle in Jurassic World.

The level of Oculus' involvement is an interesting question as well. At the Oculus event on Thursday, many of the keynote speakers made mention of the impact Star Wars has had on their lives and on the creation of the new technology. It's apparent that the force is in fact strong with Oculus.

Regardless of the technical aspect, the prospect of exploring Tatooine, the Cloud City of Bespin and walking through the gates of Jurassic Park are almost too much to fathom. I've not felt this much like a kid since Han and Chewie made their cameo at the end of the Star Wars 7 teaser. But the most exciting part of all? So far VR Jar-Jar Binks is nowhere to be seen.