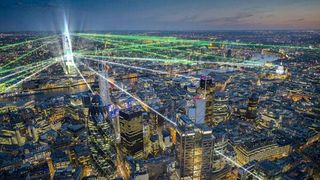 Shard as nails – If you have been to London town of late, you will have probably noticed the monolith that is the Shard towering above all other buildings and dominating the Big Smoke's skyline.

If you haven't noticed it then you will come Thursday when fricking laser beams will be bouncing off of the 310-metre building to the music of London Philharmonic Orchestra. In these austere times, we would have thought the most London could afford was the Vengaboys and some silly string but the mayor must have found some cash down the sofa or something. [Gizmodo]

Home time – PlayStation Home is still around! Yeah, we couldn't believe it either but a new update for the social-network gaming thingamajig means you can now create your digital home from scratch and become a virtual architect. Sounds, er, riveting. [The Verge]

There's a map for that – Google has decided to stop mapping this brilliant thing called Planet Earth and bring its mapping technologies indoors in the UK too (following its release in the US and other territories).

In a move that's a bit like when you were at school and it was raining so you were forced to play chess in a classroom, Google's team has been mapping loads of indoor areas, like the British Museum, Harrods and Kings Cross Station - plus businesses can submit their own floor plans too. [Wired UK]

Resale of the century – A court has ruled that retailers can't be stopped re-selling games, even if they have been downloaded from the web. The move will likely cause Apple to have a small haemorrhage, considering how locked down it is about the stuff it sells to consumers as the move covers websites and digital copies in the future too. [CNET UK]

Thanks for the ad – a new mobile broadband service has landed that is completely free! Well, there is a small caveat - you have to watch a few adverts to gain free credit that you exchange for wonderful broadband on the go.

According to the folks behind Samba Mobile, 2.5 minutes of ads a day equates to 517MB of data. No word if the ad you have to watch is that one about Lenny Henry being a giant incarcerated in a purple motel room that's far too small for him. [Samba Mobile]

Meego-ing nowhere – Nokia has performed mouth to mouth on its N9 handset, offering up over 1,000 bug fixes and in the process luring users into a false sense of security that MeeGo is still alive. It's not, so get over it as your phone can't take much more of those salty tears you keep shedding. [IntoMobile]

What a load of downloads – Netflix sailed passed the 1 billion movies downloads mark in June making it the busiest month for the company ever. It's unclear how many of these were Adam Sandler movies watched at four in the morning while still beered up from the night before. We are guessing quite a few. [BGR]

Music maker – Samsung has released a brand-new app that allows you to stream music from the Top 40. Given that the Top 40 isn't something someone over the age of 16 listens to we are not sure how popular the app will be.

But it has come to the Samsung Galaxy Ace 2, in conjunction with MusicQubed, and will cost £1 a week to use. There is a two-month trial period though, so you can see if you fancy listening to a chart filled with the likes of Stooshe, Katy Perry and Taio Cruz. We managed five minutes.

Bean there, done that – Jelly Belly has decided that satiating the nation's sweet tooth is not enough for the company and has released a range of earphones that look like you are sticking jelly beans in your ears. Unfortunately, unlike the company's prior range of iPhone cases, the earphones don't smell of jelly bean – unless ear wax is a Jelly Belly flavour. [Pocket-Lint]

Let me be your Fantasy – Final Fantasy VII is being relaunched with all new levels and achievements. The original game came out 14 years ago. Incidentally 14 years was the age gap between the now divorced Ashton Kutcher and Demi Moore. Coincidence? We smell a conspiracy. [VideoGamer]