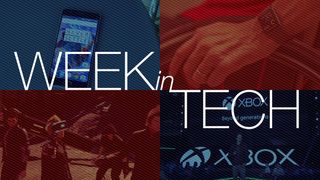 It's been a frenetic week in tech land, with so many exciting new things going on that seven days doesn't feel like nearly enough time to pack it all in. Fancy a new Mac operating system? A new iOS? Better Apple TV? A new Xbox? A great new phone? A whole bunch of games? VR? The moon on a stick? We've got them all. Well, all of them apart from the moon on a stick. But we're working on it. In the meantime, here's Week in Tech!

If it's June it must be WWDC, Apple's annual event for developers. We didn't get to see any new hardware, but there was lots of other news to get excited about. We've put all the highlights together in one place, and there are lots of them: watchOS 3, which, if the presentation can be believed, actually works at a decent speed; a host of improvements to tvOS on the Apple TV; the end of the OS X brand in favour of macOS, the first iteration of which will be called macOS Sierra and will bring Siri to the desktop; and iOS 10, the latest refinement of the operating system for iPod touch, iPhone and iPad. Of all the improvements to iOS, the one we're most excited about is the ability to remove the stock Apple apps.

There was plenty of other news from WWDC 2016. The star of the show, Apple Music marketing boss and self-described "head diva" Bozoma 'Boz' Saint John, had delegates rapping along to Rapper's Delight as she showed off something we thought we might never see: a version of Apple Music that wouldn't drive you to tears of fury.

Apple's HomeKit automation platform has been improved too, with Hue-style Scenes that enable you to create complex commands such as turning everything off at bedtime. HomeKit has moved into iOS's Control Center, and it's been given the simpler name of Home. The Apple Car didn't appear, of course, but we did see some CarPlay improvements.

The biggest news of all wasn't a product, however. It was Apple opening up Siri, iMessage and Maps to third-party developers who can now build apps that use them. James Peckham explains why that's a big deal: "Traditionally, Apple has been a closed garden. Opening its apps up is an impressive turn that many didn't see coming… Together with third-party services, the Apple apps you know and love could well become the best of the best."

Microsoft gets on the S Express

While Apple fans were experiencing Rapper's Delight in San Francisco, gamers were being offered delights of their very own in Los Angeles. E3, the annual entertainment expo where gaming's big hitters tend to show off their biggest hits, was a bumper one this year, featuring new hardware, new games and a little bit of mystery too.

Hardware first. Microsoft showed off the Xbox One S, which Nick Pino describes as "an Xbox 1.5": it's slimmer, sleeker and more powerful than the first One, with enough power for 4K and HDR video streaming. However, both Sony and Nintendo were no-shows, hardware-wise: the 4K PlayStation 4.5, aka the PS Neo, wasn't shown off at E3, while Nintendo remains tight-lipped about its NX.

Gamers have lots to look forward to. Nintendo's Legend of Zelda: Tri Force Heroes looks like a hoot, and fans of bumping into things while wearing a bucket on their head will be thrilled by the amazing VR experiences that are just around the corner, including Fallout 4 VR and – yes! – Serious Sam VR. Sony showed off a stellar line-up, including God of War, Resi 7, Horizon Zero Dawn and Detroit: Become Human; and Microsoft had Xbox fans drooling with a line-up including Gears 4, Dead Rising 4, ReCore and Sea of Thieves.

But the most intriguing game of all is the most mysterious. We know nothing about Hideo Kojima's Death Stranding beyond its enigmatic trailer which, as Parker Wilhelm says, features "a nude Norman Reedus, clutching a baby that may possibly have never existed, stranded on a beach strewn with corpses of sea creatures".

3: It's the magic number

There's a new flagship phone in town, and it's a bargain: with a price tag of $399 (£309, around AU$450), the OnePlus 3 costs much less than similarly specced phones from more established brands. There are a few compromises – the camera isn't stellar and there's no microSD slot – but, as John McCann says, "it goes toe-to-toe with the high-end flagships of 2016". It isn't the best phone in the world, but it might just be the best value.