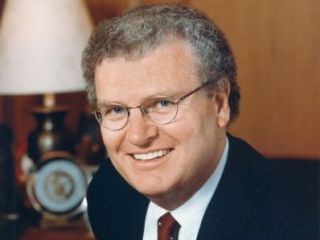 Howard Stringer, the first non-Japanese CEO of Sony, has been in his role since 2005

Sony CEO, Sir Howard Stringer, says the high price of the PlayStation 3 console could lead to it being a disastrous flop. He made the statement in a TV interview on US programme CEO Exchange .

He said, "If we fail, it is because we positioned PS3 sales as the Mercedes of the videogame field." Stringer also went on to praise the Nintendo Wii console, dubbing it a "wonderful" device, but said that the target audience for the Nintendo console was a totally different demographic to that of the PlayStation 3.

"PS3 is a different audience and it can be whatever it wants; a home server, game device, even a computer," he said.

Stringer commented that Sony feels it missed out on the digital music revolution. "In 1997 we were working with IBM on electronic music distribution and could have put this out five years earlier [than the Apple iPod]. But we couldn't get our people to understand software. And we are a music company. They saw digital media, panicked and didn't like it."

"I would never sit up here and say I'm not worried about Steve Jobs. I wouldn't bet against Steve. The good news is that he has spotted a trend that we've seen.

"The phone is a convergence device, between music and a phone. We are all building variations on the same theme. We have sold plenty of Walkman phones [from Sony Ericsson], especially in Europe."

The PlayStation 3 has had disappointing sales in America and Japan since it launched there last year. The brighter side of the Sony empire is its Blu-ray venture alongside other advocates of the technology, such as Apple and Dell.

Last week, Blu-ray Disc Association chief Frank Simonis told Tech.co.uk in an interview that Blu-ray is almost guaranteed to win the optical media format war, and a landslide victory is just around the corner.

Brit Howard Stringer has been Chairman and Chief Executive Officer of Sony Corporation since June 2005.