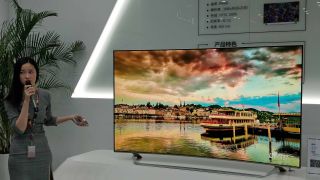 Screens are everywhere now. Taking into account mobile phones, tablets, laptops, desktops and televisions – not to mention smart displays – it’s no longer surprising to have several screen-based devices in your home, making the classic television a harder proposition than ever. So how does a TV maker compete in such a flooded market?

We spoke to the Kevin Wang, CEO of Chinese electronics brand TCL Multimedia, about the challenges facing TV makers today – even for one like TCL, now one of the largest TV manufacturers in the world, behind only Samsung and possibly LG.

Wang, who has held the chief executive position since 2017, admitted concern on the growth of the TV market, and the need to keep up amidst intense competition to get TVs into people’s homes:

“The whole market has big growth now. So you need big innovation… We have 8K coming, all on bigger screens, and a lot more panels [being produced].

With so many devices competing for viewers’ attention – we only have so many eyes, after all – it’s only natural that televisions have had to aggressively target their core proposition: offering a larger and more cinematic viewing experience than the other screens that you own.

Whereas 40-inch TVs used to be seen as market-leading (let alone the 29-inch CRTs of Wang’s childhood) buyers today are largely opting for 55-inch TVs, with 65-inch TVs being the fastest growing size category. Even larger than that, the 75-inch televisions out there are appearing more and more, even if the compact homes of Europe and the UK are somewhat resistant to the trend.

Wang himself says he needs a TV to be “as big as possible”, and prefers watching on an 85-inch television – something we assume isn’t too hard to get hold of when you run one of the world’s largest TV makers.

But it’s clear that televisions have had to fight furiously against the tide of smaller-screen media – what with all those distracting social media apps and ‘friends’ – with Wang saying the products available today have to compensate by being “much, much more beautiful than five years ago.”

The need to improve visual performance to compete with smartphone screens is a sentiment echoed by Jiangyue Wang, PR Manager for TCL Electronics Europe – who added that the picture processing in TCL's latest televisions utilizes "the same color and effect to make a selfie look better, or more pretty."

Kevin Wang: “In China, a lot of customers have a TV, but they don’t have much time to watch TV... They’re just too busy on their phones.”

The comments are even more interesting in the runup to TCL’s first own-brand smartphone. While TCL technically manufactures mobile screens through its subsidiary CSOT, it has yet to release a smartphone model under its own name.

While Wang states that TV will remain "our major business", it makes sense to leverage its current manufacturing facilities to diversify the products under the TCL brand – adding the smartphone to a host of new audio and lifestyle ranges including headphones, soundbars, and even smart mirrors and toothbrushes.

The mobile market isn't easy to enter, though, with even Apple reporting smaller iPhone sales YoY amidst fierce competition. But TCL's hand in smartphone production should help somewhat.

While details are currently scant, we expect the model to land before the year is out, around September or October. Release in Europe is confirmed, but not whether that will include the UK. We’re told by a TCL spokesperson that it will be “high quality”, but TCL’s aggressive pricing makes us think it won't be a model to break the bank.

We’ll be sure to keep you updated when we know more on pricing, specs, and where exactly we can expect the smartphone to land.