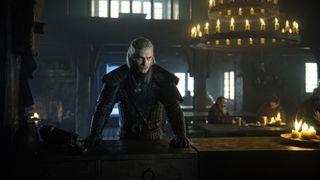 The Witcher on Netflix is one whole aesthetic (Image credit: Netflix)

I've been playing PC games my whole life: my dad had a crummy old computer when I was a little kid, and it was good enough to play Starcraft and Diablo (and not much else), so I spent way too long playing those particular games. Later, I bought a prebuilt PC at Best Buy that could run WoW, and it was fine.

For a while, I was perfectly OK playing World of Warcraft on medium settings, getting something like 30fps in raids at 720p and calling it a day. But one day I saw my roommate at the time playing this hot new game called "The Witcher 2" and I was transfixed. How could a game look this real? I couldn't really afford a high-end machine back then, but it inspired me to really dive into the world of PC components: if I couldn't afford it, I was going to learn as much as possible and dream.

So in a weird roundabout way, it's thanks to the Witcher 2 that I have the job that I have. I was eventually able to pick up an AMD Radeon HD 5870 to play the game, and since then I've been sucked into a world of silicon and elitism. Go me!

It's easy to see that I have some pretty significant attachment to the series, even if I have some problems with the way CD Projekt Red handles its social media. So, when I heard that Netflix was going to make a TV show, I was pretty excited to see how it would turn out. Even if it was a completely cheesy train-wreck like the 2002 series, I'd be totally here for it. I grew up glued to the SyFy channel, after all – I love bad fantasy TV shows and cheesy garbage.

But it's actually good? I'm pretty sure I've watched the Witcher on Netflix at least twice through already, and I simply can't get enough. Pretty much every character was cast perfectly and showrunner Lauren Schmidt Hissrich absolutely nailed the writing and aesthetic of the property.

One of the best things for me has been watching Geralt and Jaskier banter back and forth like the boyfriends I wish they were. But unfortunately there are only eight episodes, so I have to wait for the next season.

It turns out I might have to wait until 2021 until the next season, according to this report from ScreenRant. I've had to turn elsewhere for my Witcher fix.

Luckily, there are three amazing games that will always feel like home to me. So, over the holiday break I downloaded The Witcher 3 onto the Alienware m15 and started the story over from the beginning. And while it was nice to start exploring Velen once again, I had the hankering to go back even further in time.

The Witcher 2 is still gorgeous

Anyone that played the Witcher 2 on PC back in the day probably remembers the dreaded Ubersampling graphics option. Clicking this box would enable some of the most intense supersampling I've seen to this day. If you don't know what supersampling is, it basically renders the game at a higher resolution, then scales it back down in order to make the game look more crisp.

This option made the Witcher 3 one of the most graphically demanding demanding PC games on the planet, and I've never been able to play with it enabled. But now I have an RTX 2080 Ti and an AMD Ryzen 9 3900X in my home system.

I had to jump through some hoops, of course. The Witcher 2 came out before Ultrawide monitors were really a thing, so it doesn't natively render in 21:9 resolutions. But I was able to fix that through Flawless Widescreen program and I'm so glad I did.

With my extremely high-end gaming rig I was finally able to play this game at a high 3,440 x 1,440 resolution with Ubersampling enabled and it was a dream come true.

The Witcher 2 is kind of like comfort food for me, I've played through it so many times, and now that I can play it again looking like this, I can't wait to dive all the way back into it.

And I can't forget about the original game either. I've only played it through once or twice, but one of my colleagues pointed me to this mod for The Witcher: Enhanced Edition that has Dandelion (Jaskier in the show) performing "Toss a Coin To Your Witcher." So now I have to play through the original game again, too. Maybe playing three extremely long RPGs will tide me over until CD Projekt Red drops Cyberpunk 2077.

So basically I'm in heaven

I have to admit, when the show was coming out I was afraid that it would turn me off of the games that basically got me into the computing world in the first place, but the opposite kind of happened. I've never been more excited to go back and play a bunch of old games now that so many more people will be discovering them.

And if you haven't played the games or read the books, and the Witcher TV show inspires you to check them out – you're in for a treat. There's nothing I would love more than to experience this wonderful series again for the first time, and I'm so, so happy that you get to have that experience. It's going to be great.