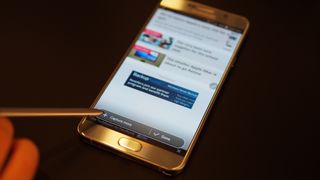 There's a crystal clear winner among best smartphone displays, and it's the Samsung Galaxy Note 5, according to display experts today.

Samsung's new quad HD phablet, which launches on Friday in the US, matches or breaks all sorts of records in smartphone display performance measurements, reports DisplayMate.

Think the previous record-holder, the Galaxy Note 4, looked good? The Galaxy Note 5 improves upon it with slightly lower screen reflectance and up to 23% more brightness.

It achieves this with 21% better power efficiency, according to DisplayMate. That should really help with Note 5's smaller 3,000mAh battery, down from its predecessor's 3,220 mAh capacity.

Samsung's display research efforts may have come to a peak with the Galaxy Note 5 and also-lauded Galaxy S6 Edge+.

It's gotten to a point where DisplayMate calls it "absolutely pointless" to further increase the display resolution and pixels per inch. It's a "marketing wild goose chase into the stratosphere."

Instead, the suggests is that Samsung and other phone manufacturers focus on improving real world display performance in ambient light among their OLED and LCD panels.

Of course, real world picture quality and screen readability in ambient light aren't backed up by the sexy numbers of skyrocketing resolutions and pixels per inch. At least not yet.