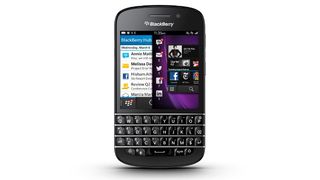 A design so old, it's cool?

While BlackBerry's Q10 has been available in other parts of the world for a couple of months now, the troubled smartphone-maker has announced that the handset will finally make its way to Australia from July 1.

Sporting its iconic physical keyboard, the design of the BlackBerry Q10 calls back to the traditional BlackBerry designs of old. The company touts the Q10's 3.1-inch Super AMOLED HD touchscreen as the largest screen on a Blackberry phone with a physical QWERTY keyboard.

The handset will run the new BlackBerry 10 operating system and also has 4G, NFC, 8MP rear camera, 2GB of RAM, 16GB of internal storage and a 2100mAh battery.

Optus confirmed that the Blackberry Q10 will be available for its customers from July 1, but will be announcing pricing and plan details closer to the date. It seems likely that Optus customers will be able to pick up the handset on a 4G plan.

Telstra will have the handset available on its 4G network from July 2 through both business and consumer plans. Telstra customers will be able to pick it up on either a Business Performance Plan or Every Day Connect plan, both for $60 a month with a $11 monthly handset repayment fee (minimum cost $1704), or outright for $744.

The handset will also be sold through Harvey Norman and JB Hi-Fi.