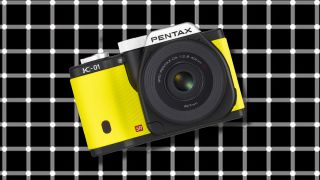 The mirrorless K-01 was supposed to signal the re-emergence of Pentax after a pretty crappy 2011.

Those 12 months saw parent company Hoya offload Pentax to Ricoh, while the brand managed to launch just four compact cameras and the ill-conceived Q mirrorless camera over that same period.

So any camera that was designed to put Pentax back on the map after a tough year had to be a bit special. The Pentax K-01, though, was special for all the wrong reasons.

Let's start with the, shall we say, challenging looks – this was a camera that only a mother could love. I can remember seeing leaked close-up shots of the camera on various rumors sites, but nothing quite prepared me, or the rest of photography press that had gathered at the camera's official launch, for what we were about to see.

You could be forgiven for thinking that this childlike, boxy design was the work of a frustrated Fisher Price toy designer, but it was in fact the work of the celebrated industrial designer Marc Newson.

According to Newson, the K-01 features a "contemporary yet timeless design. The body consists of clean and simple lines, creating an elegant graphical composition whilst preserving all the functions of a professional camera."

I've got nothing against cameras breaking away from their traditional design constraints, but the K-01 feels like something Newson knocked up on a Friday afternoon when his mates were waiting for him in the pub. "Marc, don't forget you've got to design a camera for Pentax..."

What's weird, though, is that during the whole product development process for the K-01 no one piped up and said "Doesn't this look a bit naff?" Maybe it was a case of the Emperor's new clothes; maybe they were all just glad to still have jobs. Or maybe I'm missing the point – the K-01 was, after all, awarded a Red Dot Design Award and German Design Award 2013 Gold Award.

To be fair, many of the K-01's controls are in the correct place and the camera is well made, but with the rubberized surface round much of the body's boxy design it felt a bit like one of those rubber bricks you're made to pick up from the bottom of the pool when you're learning to swim.

Surely, though, if it was a mirrorless camera it shouldn't have been so bulky? Well, here's the thing – because it was designed to use K-mount lenses like its Pentax DSLR cousins, it still had to have the same flange-back distance between the sensor and the rear of the lens.

In essence then, there's a lot of wasted space in the middle of the K-01, making the camera as cumbersome as any entry-level DSLR, and completely missing out on one of the key advantages of mirrorless cameras over DSLRs.

Sticking with the K-mount also brings its problems. While it did mean a wealth of lenses were already available for the K-01, they weren't bespoke optics designed to function optimally on a mirrorless design.

Using this legacy glass, which had been designed to work on DSLRs with phase-detect AF sensors, with a camera based around a contrast-detect AF system meant focusing was slow.

That said, image quality was good for a camera of its time – the 16.8MP APS-C delivered detailed images with rich colors; unfortunately that's as about as far as its redeeming features went.

You really had to be a fully signed-up member of the Pentax Owners Club to want a K-01 – and even then it was a hard sell, considering that you could buy an entry-level Pentax DSLR with a similar spec (and the advantage of an optical viewfinder) for less cash.

Not surprisingly then we've been spared a follow-up, with Pentax turning its attention back to enthusiast DSLRs, and consigning its dreams of becoming the Apple of the camera world to the history books.