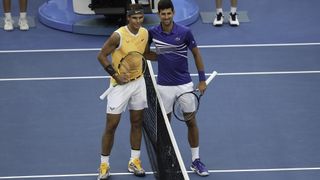 Image courtesy of ausopen.com
JUMP TO:

With everything that's happening in Australia right now, it may feel hard to get too excited about tennis. But the Australian Open is here and looks set to get started as scheduled. And you can watch all the tennis action unfold from absolutely anywhere in the world with our handy 2020 Australian Open live stream guide below.

The 108th edition of the Aussie Open see Novak Djokovic and Naomi Osaka defending their titles.

The action starts most days at 11am AEDT, that's midnight GMT, 7pm ET and 4pm PT.

Djokovic will be buoyed by recent success in Australia after he started in Serbia's win at the innugural ATP Cup Down Under earlier this month. Japanese ace Osaka meanwhile comes into the tournament off the back of a shock defeat to Karolina Pliskova in the semi-final's of the Brisbane International.

While showers are expected for the early part of the tournament, the bigger concern for players will be the air quality in Melbourne thanks to the ongoing bushfire tragedy in the east of the state.

Tennis fans will be hoping the haze won't impact on what looks set to be the most eagerly contested Australian Open for some time. Find out how you can live stream all the Australian Open 2020 tennis action from wherever you are in the world below.