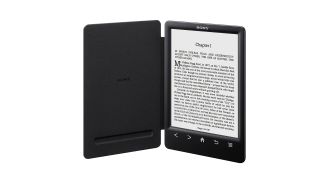 Sony mimicking a real book by covering it up.

Announcing that it will be launching the Sony Reader PRS-T3 on September 9 for $149, Sony is getting in early ahead of Amazon's new Kindle Paperwhite and Kobo Aura ereaders, which are slated for release in the following weeks.

An update to its PRS-T2 ereader, the PRS-T3 does away with the stylus, meaning you'll be using your finger for note-taking on the 6-inch screen, which has an HD resolution of 1,024 x 758 (212dpi) with 16-level greyscale.

The Wi-Fi ereader has 2GB of internal storage that is expandable up to 32GB via microSD for all your ebook-downloading needs, or to hook it up to a computer, you can use micro USB – which is also used for charging.

No lights for Sony

The Sony PRS-T3 does not feature an in-built light as with the Paperwhite or Aura, but it does use E Ink Pearl v220.

This may deter late night readers, but it does also mean that it will probably be a cheaper, yet powerful alternative.

And unless you want a case that has its own light, the PRS-T3 also comes with its own integrated snap case, which when closed, automatically puts the ereader into sleep mode.