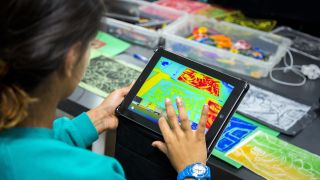 An Apple for teacher: how tablets are changing education

"If you're writing poetry, write it. Don't type it in just because you can."

The classroom is changing, as new technologies dramatically alter the learning for both teachers and students. And at the heart of this change is the tablet.

You might not think of the classroom as a key market for big companies such as Apple and Google, but according to research conducted by the British Educational Suppliers Association (BESA), there will be nearly a million tablets in UK schools alone by 2016. That's indicative of a vast worldwide market. Manufacturers understandably want their share – and it comes with some significant benefits to education too.

According to BESA, the iPad has the lead at the moment, with 50% of secondary schools preferring the iOS platform compared with 29% for Android. Apple has confirmed it's sold over 15 million iPads into education alone.

That would explain the significant investment in dedicated education platforms: Apple has iTunes U to make virtual courses, iBook textbook creation, an education section in the App Store and the Apple Distinguished Educators program, where Google has only recently launched the Google Play for Education portal to help teachers find dedicated apps and books.

The iPad has such popularity in education that the city of Sneek, Holland, there's an institution called the Master Steve JobsSchool. Here, Apple's tablet is more than a convenience – it's the foundation of the whole educational philosophy. Everything is channelled through the digital hub, and teachers are referred to as "coaches".

This leads to a bigger question: is the iPad a tool for teachers to use, or could it actually replace them?

Unsurprisingly, the answer from the schools I interviewed was emphatically "no". However, most are hugely enthusiastic about the possibilities offered by the iPad as a tool to allow good teachers to improve their educative skills.

"The iPad in itself will not impact results on its own," said a blog post from the de Ferrers Academy, a state school that's been trialling 1:1 iPads for its GSCE and A Level students for three years, talking about the positive impact of the tablet in the classroom.

"However, for staff [the benefits are] making effective use of it, the intense focus on leveraging its ability to transform/deliver rapid AFL, effective feedback, independent study/research… and 24/7 access to support and learning resources via iTunes U/Google Drive."

To find out how teachers are using the iPads on a daily basis to improve their teaching I met with teachers Daniel Edwards (Director of Innovation and Learning) and Simon Armitage (Director of Communication) at the Stephen Perse Foundation schools in Cambridge, UK, where each child from 11 years old is given their own iPad.

One of the things that came up time and again from the teachers I spoke to is the fact that tablets have a camera and large screen, massively opening up the way children can interact with homework, document their work to refer back and improve and more easily share with parents and teachers alike.

For instance at the Stephen Perse Foundation schools, a class was set a task to identify 20 household objects, find out how they were made and use this information to explain how globalisation is present in every home.

Instead of doing a list or a static video, one pupil looked at the two options and mixed them together, creating an iMovie that showed an animated map to represent the objects, adding in stop motion.

"What was great was she clearly had fun and got the whole family involved," said Armitage.

"Getting the parents involved is something we've struggled with at schools, but proved to be one of the most impactful areas," added Edwards. "If a child is doing video all around the home, the parents must be asking what's going on, they would have talked about the project, and parents love to see engagement in learning."

Even for younger age groups, tablets are having a strong effect on learning, as a growing number of schools publish the children's work for parents to see. Even with strictly controlled use (and limited to one per three children) the children are more aware of what the projects they're doing mean.

"If you post [pupil's projects] to a blog regularly, five-year-olds will say 'hang on' before you take a picture and then correct their work," said Edwards. "Trying to get that review process is almost impossible to get into the brain of child that young, so I'm told."

The results are in

Like the Stephen Perse Foundation schools, the de Ferrers academy has been running an iPad trial for three years, and has conducted studies which show an improvement in A-Level grades through tablet use – including a record result in Maths and Phsyics for the first group of students equipped with their own iPads in 2012.

The same study showed a tremendous appetite for the new educational tool from the students, with 82% citing the tablet as having a "positive" or "very positive" effect on their learning experience.

This upturn in results and attitude towards the technology is also giving teachers more freedom to develop a closer educational relationship with the pupils. Instead of simply dictating lessons from the front of the class, it lets teachers see where students have learned and where there's need for further clarification.

This can come from a simple set of questions answered in an online test – giving instant answers and showing where the gaps in learning might be - to getting pupils to give audio recordings of their voice with projects.

This information, and the speed at which it's returned, can then be used to prepare more targeted lesson plans, saving time and helping children learn more effectively in the process.

Some parents might worry that the iPad will become a crutch for teachers, a way of easily creating lessons that are showy and exciting but don't really teach a child in the same way as traditional methods.

But those using the technology believe it can enhance the established systems rather than replacing them.

"The curriculum will define the content you require and the skills you would use to teach, but you would always adapt that, however you're teaching. That's the point," says Edwards.

"For instance: a seven-year-old is given the water cycle to learn, and they've got to use a definition, an explanation, and a review. They can define it on paper, explain it and then review it by asking other people to comment.

"But what the teacher wants is their unique voice. I can get an audio recording of each module from every student and I can get what they understand and don't from their voice – and you get more from that than what they write."

Edwards also pointed out how this worked in the opposite direction, with the iPad allowing him to give more feedback without adding time to his working day.

"I had one class I marked with written work, and one that I annotated and recorded my voice. When I read out the written feedback, it was about 30 seconds long, where my video was 90 seconds. That's three times as much feedback in the same length of time for marking, because I had this device in front of me."

Putting U in the middle

At the core of this iPad learning is iTunes U. Apple's online portal allows teachers to create courses that are available to all those enrolled.

With over 1.3 billion course downloads already, it allows teachers to set up the lesson materials for each student level the night before and offers students access at any time to the resources used in lessons – meaning pupils of different abilities can be catered for in lesson plans by adding in different elements appropriate to their level.

The resources in the iTunes U program are vast: it can include anything the teacher wishes, from web pages to PDFs to videos and pictures. Apps play a big part too, with students being asked to use dedicated tools to help explain elements of lessons more simply.

Most of these courses are private, with a code needed from the teacher to get access. However, courses are increasingly being made public, allowing anyone to access to information on subjects ranging from evolution in the Galapagos to advanced geometry and calculus.

But open it up as a non-teacher and iTunes U is a confusing place. It looks like a load of subjects with some random documents assigned. So why does Apple's education portal exist? Why are teachers putting their courses online for others to see?

"They're not designed for remote learning," said Armitage. "[Teachers] on the outside say, 'Well, how am I supposed to teach using that?' Well, that's your bit."

"It's a resource, a different point of view," adds Edwards. "[A teacher] can look at Simon's course from another school and take 15 of those resources and use them in their course.

"There are loads of teachers posting content all over the place, telling people what they want to do, with which resources people can look at and use freely. It makes education in learning much easier."

Having the courses centralised also allows pupils to manage their own learning – if they miss lessons through illness, all the information is there, rather than leaving the teacher to photocopy courses, send exercise books through and make phone calls to explain what was missed.

The other element that attracts teachers to the Apple online portal is iBooks' textbook library. A vast number of volumes have already been created and can be instantly distributed to students, meaning no more back pain from lugging them to classes.

But the ebook distribution model also allows teachers to be even more tailored: iBooks Author lets educators create their own bespoke textbooks for their classes. In fact, 45,000 have been created already for that purpose, including some made by the students themselves.

These are then published through the Apple portal, making them available for other teachers to look at and include in their curriculum.

Next Page But who pays for the tablets?
See more Tablets news