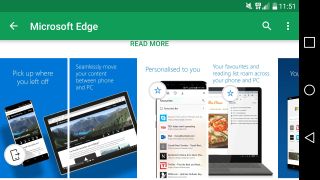 Microsoft Edge for Android now has Adblock Plus built in, stopping intrusive advertisements and trackers from spoiling your browsing. Ad blocking is now available to beta users, and will be rolled out globally very soon.

Once you have the update, you can activate the ad blocker in Edge's settings. The Edge beta program is currently full, but once spaces reopen you'll be able to opt in via the Google Play Store.

Google integrated an ad-blocker into Chrome for Android earlier this year, although in practice it only prevented the most egregious ads appearing (including videos that play sound automatically and those that take up half your screen). Adblock Plus takes a far more drastic approach, putting the brakes on pretty much all advertising.

Edge is a relative newcomer to Android. It's been available on Android phones since October 2017, but only arrived on iOS and Android tablets in March this year. It'll have to work hard to compete with the more established mobile browsers, but the addition of a powerful ad-blocker from a well-known name could be enough to convince some users to make the switch.