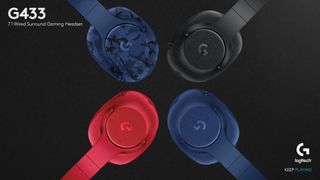 If you ask Logitech, the “lifestyle” gaming headsets recently put out by gaming accessory makers as of late are true enough to that word. To that end, the firm has released the Logitech G433, a $99 (about £76, AU$131) headset that works with every gaming and audio device.

The core idea here is a gaming headset that will look and feel at home hooked up to your Nintendo Switch just as much as it would connected to your iPhone 7, using a 3.5mm analog connection, naturally.

Coming in at just 259g, the G433 is Logitech’s lightest headset crafted to date.

The headset comes in four colors: black, red, blue and camo blue (a Best Buy exclusive), and includes two cabling options – one for PC and one for mobile devices or game consoles with an in-line microphone – as well as a detachable microphone that offers a small pop filter for stronger noise cancellation. Logitech has the versatility down, but what about feel?

Logitech wrapped the G433’s ear cups in a mesh fabric that’s hydrophobic and stain-resistant, while providing both microfiber cloth and sports mesh ear pads, the latter of which are machine washable. The headband is comprised of both a carbon fiber and steel for a balance between flexibility and rigidity.

Inside, Logitech outfitted the G433 with 40mm, proprietary Pro G drivers in a system that’s specifically tuned for analog audio performance, a first for the firm. Supporting that is a custom acoustic chamber in the ear cup that allows for more airflow and thus accentuates frequencies on the low-to-mid ends of the spectrum.

The Logitech G433 goes on sale this month both online and in Best Buy stores. As for whether it’s worth your 100 clams, stay tuned for a full review.