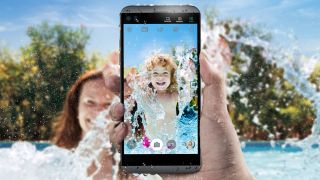 The LG Q8 just popped up on the company's Italian site, detailing a new phone that will seem startlingly like the LG V20. That's actually what's likable about it.

The LG V20 was a good phone, but it wasn’t perfect. It had great audio, a dual-lens cameras ready for wide-angle photos, and a removable battery to its credit.

But it was a phablet-sized phone, which makes it a nonstarter for some people, and it fell behind in performance as soon as Qualcomm’s Snapdragon 821 chipset came out.

What the LG Q8 does isn’t much different than the V20. It’s got most of the same blood and guts as the V20, running Android Nougat 7.0 on the same Snapdragon 820.

Both feature a dual-camera system on the rear, a 1440p display the front, and a special marquee screen at the top for shortcuts and extra on-screen buttons.

The LG Q8 does have some differences, though. Among the more notable are its IP67 rating against water and dust, letting it sit at the bottom of a meter of water for up to 30 minutes.

It’s also more pocket friendly, with a shorter and narrower frame and a 5.2-inch display. It’s likely to be priced more favorably than the V20 as well.

About that LG Q8 price

The V20 was by all means a flagship phablet when it launched. And with flagship status comes flagship prices. It launched in late 2016 with a price tag of $799 for an unlocked model, topping even the base iPhone 7 Plus price.

Since the the LG Q8 is carrying around a chipset that’s older than all the other big phones hitting the market, like the OnePlus 5 and Samsung Galaxy S8 with their Snapdragon 835 chipsets, it would be a misstep to try pricing the Q8 in the same ballpark.

That means mobile users will likely be able to get their hands on this scaled-down version of the LG V20 at a nice budget price.

While the LG Q8 doesn’t gain much favor from its chipset or internal storage limited to 32GB, it still offers a lot that budget tend to miss.

Dual-camera systems aren’t showing up on many cheap phones yet, and 2,560x1440 pixel displays are especially rare at low prices. For music lovers, it even has a special DAC for high quality audio playback, and can record 24-bit/192KHz audio in the FLAC format.

You won’t find many phones that do what the Q8 will do in the sub-$600 category.

Though it’s not certain the Q8 will hit those low prices, it seems likely that LG will use the Q8 to introduce the premium features of the V20 to a wider audience.