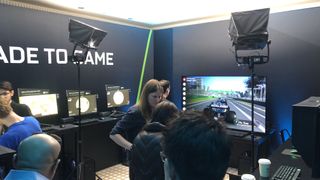 Nvidia provided this photo for me, because I forgot to take my own photos. (Image credit: Nvidia)

When Nvidia announced its new lineup of G-Sync gaming monitors with 360Hz refresh rates, I have to admit I was a little taken aback. We saw a few 300Hz displays back at IFA 2019, and while we didn't get a chance to demo them back then, I was a bit skeptical that anyone needed a refresh rate that high.

I like to try things out for myself before I pass judgement, however, so when Nvidia invited me up to its CES 2020 gaming suite to check out the latest in its technology, I had to oblige.

One caveat that I need to get out of the way is that I'm not really into esports, so when I confront a super-high-refresh display, I usually fall into the mindset of "I understand the appeal, but it's just not for me." The gaming monitors I'm into are the ones that have high resolutions with HDR, so that's where I'm coming from.

That being said, I am used to a 120Hz refresh rate at this point, thanks to the AOC Agon AG352UCG6 I have at home - a 60Hz display feels sluggish in games. But, does that mean 360Hz is the future?

In Nvidia's CES suite, it had two of the new 360Hz display from Asus on display next to 60Hz panels, all of which were running Counter-Strike. The Nvidia rep then gave me a challenge, see if i can shoot more people on the 360Hz display.

I was set up with an AWP staring at a narrow doorway on the classic De_Dust map. Enemies would jump across that doorway and it was my job to shoot them in the split second they appear.

On the 60Hz monitor, I got 0. I missed every single shot. Either I saw them and couldn't react fast enough, or I tried to predict when they'd be there and shoot too soon. So, obviously 60Hz isn't fast enough to be competitive in online shooters - but I already knew that.

For the next test Nvidia tried to see how much better I would be at aiming. Now, I'm pretty much terrible at shooters precisely because I can't aim, so this went about as well as you'd expect.

I don't remember the scores I got on this test, but they weren't great on either monitor, even if the 360Hz panel saw me get a marginally higher amount of headshots.

So, when it comes to raw personal performance in games, especially esports titles, the 360Hz panel seems to pay off.

My eyes deceive me

Seemingly prescient of the fact that someone was going to ask about how 360Hz displays compare to 240Hz, Nvidia had monitors with these two refresh rates right next to each other. In order to illustrate how much better 360Hz was in this scenario, footage of DOTA II was looped between the two. This is where things fell apart a bit for me.

There were other people in the suite with me that could definitely tell the difference between the two monitors, but I just couldn't. Either display just looked like this endlessly scrolling map. The Nvidia rep tried to direct me to point my eyes to where it made the most difference, how the text over players was more legible as it scrolled  on the 360Hz display, but I couldn't see it.

So, with refresh rates this high the results may be a bit more subjective and that's something you should keep in mind before opting for one of these displays. I know that not everyone will be able to test the monitors next to each other like I was able to, but you should really consider whether or not the display is right for you. The way I see it right now is that only esports addicts need apply - as the benefit is definitely there for them.

As for everyone else, maybe go for the ASUS ROG Swift PG32UQX with its 4K, 144Hzz G-Sync panel instead - I know that's what I have my eyes on.