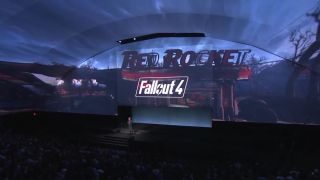 If you didn't think a new Quake game was enough of a bombshell, Bethesda also announced Fallout 4 will debut on the HTC Vive virtual reality headset in 2017.

On the E3 2016 stage, marketing chief Pete Hines explained Fallout 4 would just be the beginning of Bethesda's virtual reality initiative, but it was more than enough to evoke an excited reaction from the crowd.

The best news is that, unlike Star Wars Battlefront VR, this one's not just a spin-off level or two - you'll be able to play the entire game in virtual reality. The whole thing. Just let that sink in for a moment.

As much as we love the HTC Vive, it hasn't yet found its killer app. Fallout 4 could be it, assuming there's no threat of motion sickness. It will be interesting to see if/how Bethesda makes use of the Vive's motion controls.

Bethesda also announced it would also be showing off Doom VR demos and so we hope ID Software's intense FPS will be fully adapted soon – though Hines made no promises it would be fully adapted for VR or a release date.

It's a tiny sliver of news, but the surprise announcement marks the first time Bethesda has taken an interest in VR. If there's anything virtual reality needs, it's experiences that are longer and deeper than simple mini games.

Fallout 4 in virtual reality could be the long dive in digital space we've been longing for.