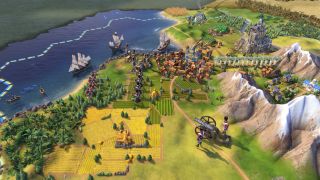 Where other franchises have accelerated their release schedules (look at Football Manager or Total War, with their near-yearly games), Civilization has operated on a slow cycle. The first Civ was in 1991 and we've had a new one every five years since then.

Not that the most recent one showed the full five years of work. Civilization V was missing so much stuff at launch that it required two large expansions (which introduced espionage, religion, and ideologies, and repaired the shoddy diplomacy system twice) to match up to the series' high standards. From our first look, Civilization VI doesn't seem to have that problem.

For those who don't know the series, Civilization is the original empire management game, called a '4X' because you 'eXplore, eXpand, eXploit and eXterminate - though mostly you explore, build up cities, and research new technologies.

We got hands on with it at a recent event in central London, where we also got to chat with the amiable Dennis Shirk, the game's executive producer.

Each time a new Civilization comes along, it gets a new Lead Designer. This time it's Ed Beach, a former tabletop wargame designer, who's bringing his own big ideas to the series. Shirk explains that Beach "wants to pull players out on the map… unstacking the cities."

Previously, if you wanted to attack someone's civilization rather than just their units, you had to butt up against a very hard target or mildly harass their mines and farms - after all, everyone defended their city centre tightly and strongly, meaning that warfare was direct and not tactical.

But Beach, seemingly following Endless Legend's award-winning example, has decided to unbundle the city - so that key areas and buildings are no longer confined to the city centre, but are spread over the surrounding landscape.

Notably, two types of building explicitly have to be built outside of the centre, on particular types of landscape; they are the series' iconic, returning Wonders - and the new districts, again inspired by Endless Legend.

That added tactical flexibility is key in multiplayer, where attacking an opponent's spaceport say might buy you enough time to snatch a victory yourself.

"That was a big goal of ours." says Shirk. "We wanted there to be a little bit more of an equilibrium between somebody who's running away with it and the person who's going to build lots of rangers and fast-moving units and still harry and bother a leading player." Pulling back on the leader like this is a classic board-game design decision.

Core to that vulnerability are those districts and Wonders. Wonders, players will know, are one-off mega structures that have been in every Civ game. They give unique bonuses to certain things and there's a race to build each. Districts, on the other hand, are new.

These are miniature urban centres dedicated to certain subjects - so a Campus district houses all your research elements, an Industrial district is your economic powerbase, and the Brazilians' unique Carnival district presumably hosts all their fruit hats, garish floats and drinks with little umbrellas in.

Both Wonders and districts occupy an entire tile. Districts, in addition, share the normal tile characteristic of drawing bonuses from adjacency - so science and faith districts, for example, really benefit from being next to mountains, ensuring a hard choice every time you build one. (Indeed, the general rules on adjacency getting the best out of your city and the landscape is a smart hex-based puzzle).

These unbundled cities have been matched by another innovation - a much friendlier world to look at, with a much less obtrusive user interface. "We need it to be readable," says Shirk.

"Before, you went into a city screen and looked at lists. Now you can glance at an enemy territory you're walking by, see the blue roofs on the campus district. You know exactly what it is without even mousing over it." Like the best competitive games, Civ now has a visual language, so that colors and shapes unconsciously feed you information as you play.

Though Shirk is keen to emphasise that this cleanness and easy of use doesn't mean the series has gone casual. "We brought forward almost every system from Brave New World into Civilization VI, tuned it for what Civilization VI was, and put gameplay on top. The look and the feel of the game is definitely not a direct reflection of the amount of content in the game. It's just a reflection of how we want players to be able to interact."

That depth is definitely still present, and reflected in three other new mechanics: the gossip system; the civic culture system; and the boosts.

Gossip is a reflection of the revamped diplomatic systems, which were sadly broken in Civ V. As you get more entangled with another nation, through trade routes and diplomatic missions, you start getting gossip through about them.

This takes the form of little on-screen pop-ups, but also gives you more information on a deeper faction screen. Here you can see if they're building up their armies, running out of money and so on.

Civic culture is a replacement for the slightly-confused set of systems that existed around forms of government in previous games. Now governments and social policies are unlocked through a civic tech tree, much like the game's iconic research tech tree. Each government can hold different numbers and types of social policy, giving players who focus on building and culture a chance to compete against research- or military-strong opponents. "We thought this would be a great way to open up the game completely for a culture player." says Shirk.

Finally, the boosts seem to be Firaxis' attempt to tie the research trees more tightly to the game. In the earliest games, the technologies felt utterly grounded in the stone age cultures the game started you from.

As the games have drifted into something more fantastical, the research trees have too - and the boosts fix them back to the world.

Each boost is a mini-quest that results in a boost to a particular technology. So defeating two barbarians with slingers will reduce the research time on archery, for example. It's a smart system that allows you to focus your military, economic and research efforts on particular goals.

Given its five year cycle, Civilization has more opportunity than most games to study and learn from the competing 4X and strategy games that have come out in the meantime - like Firaxis' own XCOM 2, Crusader Kings 2 or Endless Legend.

"This is something Sid's always harped on." says Shirk. "Never be afraid to say that there's good ideas out there… even just down the street from us when you've got Ashes of the Singularity and you've got Offworld Trading Company, all ex-Firaxis people."

Civilization VI certainly seems to have learned from them and from Firaxis' own mistakes and successes - and is going to be a much better game for it.