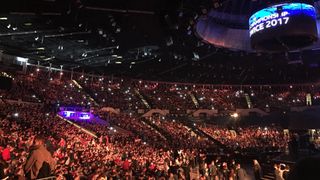 The esports industry is a phenomenon that shows no sign of slowing down. Professional sports tournaments are filling huge stadiums worldwide, while millions of viewers tune in at home to watch the best players battle it out in their favorite games.

As more investments are made, sponsorship budgets increase and more developers push an esports agenda, the industry continues to climb from strength to strength - even sporting giants such as Formula 1, FIFA and the NFL are getting involved.

It can all be a bit confusing, so we've gathered up everything you need to know about esports in this handy guide.

Esports (or electronic sports) are professional, organized video games competitions. In other words, professional gamers play videogames against one another competitively, often for large sums of money and prestige. These tournaments can range from small local matches to filling out stadiums of thousands.

According to Newszoo's 2018 Global Esports Market Report, the esports industry is estimated to be worth nearly one billion dollars within the next year - that's a year-on-year increase of a whopping 38%. In addition, Newszoo  estimates that by 2019, 427 million people worldwide will be watching esports (via ESPN).

A brief history of esports

While the assumption is that esports are only a recent phenomenon, in reality the first esports event was held back in 1972, when Stamford University students competed against one another in the game Spacewar! The prize? A year-long subscription to Rolling Stone magazine (via Medium).

The '80s saw the first true videogame tournament, with 10,000 attendees gathering for the Space Invaders Championship. However, a lot of this time period saw players focused on beating each other's high scores rather than competing in organized tournaments.

As gaming became more popular, the '90s became the first decade when esports (a term which wasn't yet coined) began to really take off, with companies such as Nintendo and Sega holding professional gaming tournaments. This is also when we began to see money becoming a factor in professional gaming - people were no longer merely playing for kudos but for $15,000 jackpots.

But it is the 1997 Red Annihilation Quake tournament which is considered the world's first 'real' esports event, with 200 participants contending to take the grand prize - the lead developer of Quake's Ferrari.

Only a few weeks later, the Cyberathlete Professional League was formed - an organization which is considered a pioneer of esports.

Due to the normalization of gaming and the internet (along with technological advances) the real surge of esports came in the noughties. It was then that we began seeing what we now know to be modern-day esports. As streaming platforms such as Twitch and YouTube took off, people began to show interest in not only playing videogames but watching them too. Popular tournaments now sell out stadiums and professional players (like Ninja) can earn millions between prize money, advertising and salaries.

Some of the most popular esport games include League of Legends, Overwatch, Fortnite, Dota 2, Counter-Strike: Global Offensive, Rocket League, Street Fighter, Hearthstone, Heroes of the Storm and Call of Duty.

Here's a collection of important facts and figures on the global esports industry (via Newszoo):

It's a growing gold mine

In the coming year, the global esports economy will grow to $905.6 million. $694 million (77%) of this of this will be generated through sponsorship ($174 million), advertising ($359 million), media rights and content licenses ($161 million).  A further $96 million will be generated from consumer spending on tickets and merchandise, while partnerships with game publishers will see another $116 million invested.

North America will account for $345 million of this generated revenue, while China will generate $164 million.

Global esports viewers will total 380 million in 2018. This can be broken down into 165 million esports enthusiasts and 215 million occasional viewers.

There are a lot of events

In 2017, there were 588 major esports events that generated an estimated $59 million in ticket revenues.

The largest prize pool was over $25 million

League of Legends is the most watched esport

In 2017, The League of Legends World Championship was the most watched event on Twitch with a viewership of over 49.5 million hours and a ticket revenue of $5.5 million.

Where can you watch esports?

Esports are typically watched through video streaming platforms such as Twitch, YouTube or Mixer. All three are available through your web browser and as apps for iOS and Android devices.

However, to truly capture the magic of esports, it's better to attend events in person. Tickets for major events are usually available from ticket retailers or the organizers website, however StubHubperhaps provides the widest variety globally.

Smaller esports events are also available and tend to be easier to access and cheaper. You can find out about these through social media groups, gaming conventions and through specific gaming communities.

Want more? Check out the rest of our PC gaming and esport content: