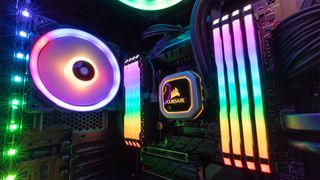 Corsair has given its Vengeance series PC memory a serious RGB upgrade along with two new tempered glass cases to show it all off in.

The Corsair Vengeance RGB has been around for a few years, but now the Pro version of the RAM is adding a light bar for even better diffusion. Plus, with 10 individual LEDs on each stick of RAM, users can now display a flowing spectrum of colors rather than just pulse between different shades of the rainbow.

It follows in the footsteps other memory kits, like the Trident Z RGB and HyperX Predator RGB, and as such you won’t need any additional cables to synchronize lighting effects across the DIMMs. On top of being addressable and programmable through certain MSI and and Gigabyte motherboard, users can further customize the lighting through Corsair’s new iCUE software.

This new program combines all the color customization granted by the company’s former CUE software with the system monitoring functionality of Corsair Link. iCUE works with all of Corsair’s prior RGB devices including mice, keyboards, liquid-coolers and fans just to name a few.

Of course, beyond looking good, Corsair’s new Vengeance RGB PRO series is engineered to perform hitting a top speed of 4,600MHz without overclocking. And, if users want to push their RAM even father, users can tweak the XMP 2.0 profile with ease through a single motherboard setting.

The Corsair 280X RGB might be small, but you can pack a ton into this Micro ATX case with ample room for two graphics cards and up to a 280mm liquid cooler on the top of the case (or two 240mm radiators on the bottom and top at the same time). This case also features three tempered glass panels and a dual chamber arrangement, where the other half conceals the storage drives, power supply and all the power cables.

For those who want even more space, there’s the Obsidian 500D RGB SE, which essentially replaces the standard 500D front aluminum plate with a sheet of tempered glass. This mid-tower comes with three 120mm Corsair Lightloop fans and a Commander Pro module that controls the RGB lighting and speed of the fans.