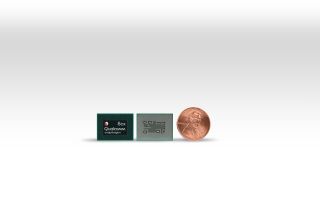 While we’ve all been waiting for the first 7-nanometer (nm) processors for laptops to come from Intel and AMD for years, Qualcomm swooped in to win first place with the Snapdragon 8cx. It’s not only the first 7nm processor for laptops, but the chip is also built on an entirely different architecture supplied by ARM, the leading smartphone processor manufacturer.

Now that Qualcomm is first out of the gate with a 7nm processor for laptops, where does that leave its incumbent competition, AMD and Intel? Now, it’s a matter of determining the silver and bronze medal winners.

Well, let’s just say one of those two is way, way closer to second place than the other, shall we?

The Red Team, as its known, is essentially on the cusp of revealing its 7nm processors, and is slated to pull back the curtain on them during CES 2019 – mere weeks away at the time of writing. This is official information, as AMD itself teased the announcement to come during company president and CEO Lisa Su’s keynote.

This will not only see AMD meet face-to-face with Qualcomm in the compute world, but also surpass Nvidia’s first 12nm architecture for graphics, Turing. As for Intel, well, that’s another story.

Now it’s time to bring out the violins for the Blue Team. Intel has experienced great challenges in bringing its transistor manufacturing process down from 14nm, where the company has been for several years. Intel has iterated on this process to great effect over the past few years, but has struggled to shrink those transistors down in a scalable way.

For instance, Intel’s true successor to its 14nm processors, a 10nm processor known widely as Cannon Lake, has been delayed twice since its originally-scheduled 2016 release. At this point, we don’t expect to see a wide variety of laptops with these 10nm processors inside – a scant few are available now in low-end devices, while we're still waiting for 10nm Intel Core parts – which might not arrive until the end of 2019.

Furthermore, the next phase of processors in line after Cannon Lake is an iteration on its long-delayed 10nm process known simply as ‘10nm+’, or Ice Lake. These surely won’t see the light of day until 2020, considering Intel’s delay of Cannon Lake and that Ice Lake is said to be an improvement upon that existing 10nm process.

With that, you can imagine just how far we are from Intel processors with 7nm transistors inside.

However, according to comments made by Intel recently which Anandtech picked up, the company is back on track with its 7nm manufacturing process. In fact, Intel said that its 7nm initiative has been underway alongside the 10nm project, implying that we could see these tinier chips follow much more closely behind 10nm parts than we previously thought.

Regardless, Intel will have to give Cannon Lake and Ice Lake some breathing room if it wants to make any return on that manufacturing cost, much less the research and development costs. So, at the very earliest, perhaps we’ll see 7nm Intel chips in year-end 2020.