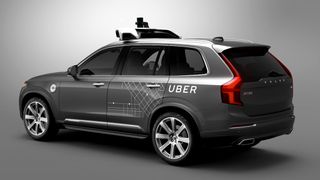 You could be sitting inside a self-driving car before the summer is out, thanks to Uber. The ride-sharing service announced it's rolling out a fleet of autonomous vehicles for its passengers by the end of the month.

Uber has teamed up with Volvo to develop modified, self-driving Volvo XC90 SUVs that customers can summon at the touch of a button. The cars will initially be deployed in Pittsburgh, Bloomberg reports.

"Volvo has consistently been a leader when it comes to safety," writes Uber CEO and co-founder, Travis Kalanick, in a press release, "and partnership is crucial to our self-driving strategy because Uber has no experience making cars."

Skeptics worried over an empty cockpit can be at ease - the vehicles may drive on their own, but a human driver will still be physically present to monitor the car and take over, if need be.

Puts the 'auto' in 'automobile'

Uber's new fleet will be the first time self-driving cars are made commercially available for ride-sharing - beating out Ford's newly announced plans to launch its own ride-share service by several years.

While this might be many's first experience in an autonomous car, the technology has been in use for quite some time - primarily the Autopilot feature on modern Tesla vehicles and Google's self-driving car.

In addition to its collaboration with Volvo, Uber also announced its acquisition of Otto, a startup developing self-driving trucks for freighting goods - further expanding the practical applications of autonomous driving.

It's too soon to tell if Uber's plans in Pittsburgh will expand, but if self-driving cabs prove to be a success, our days of awkward small talk with drivers might just come to an end.