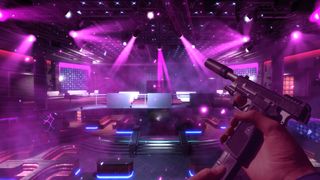 Since its launch in 2016, PlayStation VR has seen the emergence of some terrific exclusive titles, from Astro Bot: Rescue Mission to Tetris Effect. However, PSVR has been missing a genuine blockbuster, a system seller on the scale of Uncharted that can also show off VR to its fullest. Who better to lead the charge than Sony’s own in-house London Studio and its ambitious PSVR title Blood and Truth, a London-set gangster thriller that’s all about transforming the player into an action hero.

The Soho-based studio is of a different pedigree to the developers of Sony’s Worldwide Studios, and not just because it has the privilege of being located next door to PlayStation’s head office.

When it was first formed as Team Soho back in 1993, the development team consisted of college graduates with next to no experience in the games industry. It was still mostly a junior team when Tara Saunders, now head of studio operations, first began her career there as a junior animator working on London-set GTA clone The Getaway for PlayStation 2.

“Everyone had a lot of fresh thinking and and no preconceptions of what games needed to be,” Saunders tells TechRadar.

Indeed, following The Getaway, London Studio has built a heritage of pioneering emergent technology, having a role in developing the hardware as well as the innovative games that drive it. These include the EyeToy, a webcam that essentially turned humans into the controller, Singstar, which seen the studio develop a unique pitch detection Fsystem to make karaoke a competitive party experience, and Wonderbook, which combined AR marker tech with the motion controls of the Move controller to literally create magic. In each case, there’s a strong technology thread that pulls this hardware together.

It was then a natural progression for London Studio to be involved in PlayStation’s VR plans from day one, developing the in-house LSSDK engine for VR rendering and creating a collection of demos later packaged into PSVR launch title: PlayStation VR Worlds.

“VR felt like the right piece of tech for us to focus our skillset on,” says Saunders. “We’ve been working in camera-based gaming, working with 3D. Looking back at Wonderbook and what you can do with AR markers, what works with AR became what can we do with VR. With new tech, we build on each iteration to do something bigger and better with everything we’ve learned.”

In essence, Blood and Truth is a culmination of the studio’s work on a whole other level, taking bolder creative steps that other VR developers have shied away from so far. Instead of a mute disembodied avatar, you’re in the head of ex-SAS operative Ryan Marks, back home to help defend his family (and their not-so-legitimate business) from a criminal takeover.

While there’s been a nervousness to pursue photo-realism in VR, London Studio has doubled down on its photogrammetry tech to ground its characters and setting in realism, while character performances rely on eye contact to really involve you in the scene so that you’re not just an observer.

Another central problem of VR has been how to grapple with locomotion. Indeed, most developers opt to avoid movement altogether or have you traverse by teleporting. Speaking to Blood and Truth’s game director Stuart Whyte, this was an area the team looked to address very early on.

“Teleportation wouldn’t work thematically,” Whyte tells us. “We wanted a game grounded in reality rather than science fiction.”

Instead, traversal is done almost on-rails with node-based navigation, so that you simply look to where you want to move.

All hands on deck

Without needing to wrestle with a convoluted control scheme, the emphasis is instead on what the player can do with their hands, which is a good deal more than just shooting people. The variety of what you can do with the Move controllers makes it a richer, more immersive VR experience but is also important for the pacing.

“When you’re in a firefight in VR, the intensity is amazing compared to playing on a TV,” explains Whyte. “But conversely, you can’t stretch that out, so we break it up with other object interactions and story beats.”

Shooting is still a core part of what you’ll be doing in Blood and Truth, but even this comes with more satisfying physicality than just aiming and pulling the trigger. Firing an automatic weapon, you can hold it with both hands to steady your aim, reloading is done manually by inserting ammo cartridges into the weapon chamber, and you can also do some pretty bad-ass action hero things like dual-wielding or gunspinning (a trick that’s not limited to pistols).

There’s moments where your hands can make for tactile movement, such as for climbing up ladders, crawling along the floor, or in a tense moment of free-falling, reaching out to grab onto a ledge to pull yourself up just in the nick of time.

Even with the limitations of VR tech that’s really just tracking your head, the team makes use of calibrating the Move controllers to map out your body, so that you’ve got holsters to your sides for your pistols, larger weapons like rifles are kept on your back which you can reach over your head, while ammo is strapped to your chest.

“There was a huge amount of work to get that right, because the console and camera is only tracing the player’s head - it’s got no concept of the rest of the body,” explains Whyte. “Trying to make that intuitive was tough but we put a lot of time into that.”

Since the first awe-inspiring deep sea shark attack demo tantalized us with the potential of Playstation VR, London Studio has embraced the tech’s potential and its constraints to bring new possibilities in VR. While Blood and Truth may be the fruition of all the studio’s work so far (even some of the game’s panoramic views of London feature assets from The Getaway), but for Saunders, it’s just the beginning of the studio’s VR roadmap. “We like the fact that we’ve done a lot of smaller things, but going forward, we want to make big blockbusters with nice, long developed stories and believable characters,” she says.

As a studio with a rich history in using emergent tech to create new experiences, it also has another division quietly working away on new live-action technologies for use in creating interactive and cinematic games, though that’s all Saunders is prepared to say at this time. Otherwise, the core focus is on becoming the leading VR studio in the world, or in her words: “our ambition is to become the Naughty Dog of VR.”

PSVR is already performing better than the other VR headsets currently on the market, thanks to its comparatively affordable price and focus on games, though its four million install base is still a modest success compared to the 90+ million PS4s sold. Blood and Truth may be the big flagship title to truly take VR mass market.