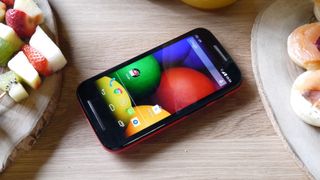 Keitai is back - and this week's instalment sees us telling you how to take a screenshot on your phone, tablet or even smartwatch. Sounds obvious - but so many people actually go to do it and realise they're not ENTIRELY sure how to do it.

Also a bad man steals some flowers and how you'll kill every contact in your phone. You're welcome.

How to take a screenshot on your smartphone

Being able to capture the current screen on your smartphone can be handy, and pretty much every handset these days provides a screen capture function.

Take a screenshot on iOS

You can grab a glimpse of any screen on your iPhone, iPad and even Apple Watch by pressing the following two buttons simultaneously.

Once you've snapped your screens head over to the Photos app and they'll be residing in the Camera Roll - if you're on the Watch you'll have to grab your iPhone to check out said photos, as they'd be pretty useless on the wrist-based wearable.

Take a screenshot on Android

With Android having multiple manufacturers things could get confusing, but thankfully most handsets follow the same structure.

You'll be able to snap a screenshot on pretty much any Android smartphone by pressing the power and volume down keys together. The main anomaly is Samsung, which copies Apple with its power and home button combination.

If your handset has a physical home key try the 'Apple method' if the power and volume combo doesn't do anything for you.

All your screenshots will be saved in a "screenshots" album within the gallery app on your smartphone, and if you're using Google Photos you'll find the same album in there too.

Take a screenshot on Windows Phone

Windows Phone mixes things up slightly by requiring you to entertain the volume up key with the power button. This works for all Lumia handsets - both those made by Nokia as well as the more recent ones which sport Microsoft's logo.

Apart from that it's all very much straight forward, with the images getting saved in a screenshot album within the Photo Hub.

Take a screenshot on BlackBerry 10

Yes, even BlackBerry smartphones can capture screenshots, and it's just as simple to do on a BlackBerry 10 handset as it is on an iOS, Android or Windows device.

Grab you Z10, Q10, Q5, Z30, Leap, Classic or Passport and hit the volume up and down keys at the same time to perform the trick.

You'll find your screenshots in the camera folder of your handset's File Manager.

Winston placed the Nokia 3310 phone down on the ferny floor beside him, looking quietly into the distance. Questions swirled around his mind: Who was this mystery texter? Why was someone trying to kill him? And why did Nokia ever make the 7600?

As he thought, he realised the forest was quiet. Really quiet. Not even the hooting of a stupid owl or the rustling of the breeze in the trees. Nothing - like a vacuum had descended and was sucking all the noise out of the place.

At that point Winston looked up and saw there actually was a massive nozzle pointing over the whole realm, with air pouring violently into it. He suddenly felt all fizzy, and began to panic as he saw parts of his body begin to disintegrate and fly upwards. He tried to claw onto a rock but could feel parts of him disintegrating.

His turbo-fetlocks began to shatter, wires pouring out from him. Winston's vision began to dull and blur, with myriad error messages screaming past his eyes.

Winston knew it was the end. He would never know what the Nokia 3310 mystery was all about, and whether he could resurrect the ailing BlackBerry brand. He would never get to see who would ultimately win the smartphone war - and he would never see his beloved Dahlia again.

It began to go dark. He could see his body falling into a thousand pieces. He felt a blinding shudder and then everything went dark.

"Sir," squeaked the small Finnish man. "We didn't get him."

The chair stayed silent, but the scientist could swear it was slightly quivering. Then he nearly jumped out of his skin when a huge fist thumped down on the table.

Cooking up a storm

It feels like a lifetime ago now but believe it or not, there was a time when Tim Cook wasn't CEO of Apple.

Here's his first ever launch as the CEO of the company. It was for the iPhone 4S and above is his opening speech for the show back in October 2010.

He says, "I want to welcome you to this room, that we call our town hall. This room, town hall has quite a history at Apple. Just 10 years ago we launched the original iPod here."

Sadly this wasn't where Cook got to launch his next big brand; Apple chose the Flint Centre for the Apple Watch announcement.

Imagine if your phone was stuffed full of people you know – and every time you added a new contact, they were squashed into your handset. Carrying around your friends and loved ones everywhere you go sounds pretty fun, doesn't it?

But what if you drop your phone? What if your device slips through your greasy fingers and plummets to the ground, and when you look down you see the broken and lifeless bodies of everyone you hold dear, pulverised and splattered like fragile humanoid egg shells?

Not so fun now is it? You monster.

Imagine being privy to the meeting where this genius advert was thought up. It must have been something akin to a scene from Mad Men.

Two men are sat on a bench, one in a lovely light suit holding flowers ready for his date's arrival, the other a naughty businessman dressed in dark hues, being boring and reading his old newspaper.

The other guy gives up on his girl and storms off, resulting in free flowers for the evil man. The Evil Man then calls his girlfriend so they can meet and he can give her the free flowers…and what is he using? It's only a ruddy Nokia phone!

It's not clear why Nokia wanted to be associated with this guy, but he's going to get his comeuppance. He sets off to give his flowers to her…but only the audience know they have the other girl's name on them. Oh, how we laughed.

Proper stuff from the site