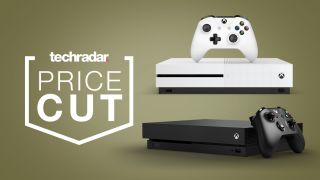 These Xbox One deals are hitting store shelves just in time for that last Christmas rush, so if you're still yet to pick up a cheap Xbox console you'll want to take a look at the savings below. Xbox deals have been falling in price since the Black Friday sales event, and today is no different. We're seeing excellent new savings with some fantastic Xbox One S and Xbox One X deals and that cheap Xbox One S All Digital Edition deal has stuck around well into the holiday season.

All of these Xbox One deals are bundled with heavy-hitting games like Star Wars: Jedi Fallen Order and the ever-popular Gears of War bundles, as well as extra controllers and digital download codes on offer. Both the Xbox One S and Xbox One X are seeing fantastic discounts on both sides of the pond, as is the Xbox One S All Digital Edition.

With Xbox Series X roaring into life in its recent announcement, these Xbox One deals are rapidly shifting in price to grab those final few gamers before the new console takes over. That's not to say you're going to be abandoning your Xbox One deal in a year's time. With Microsoft's focus on a seamless ecosystem of Xbox products like Game Pass and its PC investment, you're likely going to be reaping the rewards of such a cheap Xbox One deal for a long time.

Microsoft themselves have discounted their Xbox One models, but here's our top picks from your favorite retailers.

Xbox One deals in the US

Xbox One S All Digital Edition | $149 at Walmart
If you don't want the hassle of physical games, or if you're just not fussed about second hand savings in the future, you can pick up this super cheap Xbox One S All Digital Edition deal from Walmart. For just $149 you're getting the disc-less console as well as Minecraft, Sea of Thieves, and some Fortnite swag thrown in. This Xbox deal is perfect if you're looking to take advantage of the massive library of free games on Game Pass, a service that makes this investment well worth it.View Deal

Xbox One S | Star Wars Jedi: Fallen Order | Call of Duty Modern Warfare | extra controller | $249 at Walmart
This amazing Xbox One S deal packages two of the biggest games to launch on the system this year together with a fully fledged disc supporting console and an extra controller to boot. At $249, this is a fantastic price, and definitely not one to be missed. You can trade Star Wars Jedi: Fallen Order for an NBA 2K20 bundle for the same price.
View Deal

1TB Xbox One S |  Gears 5 Bundle | $223 at Amazon
This Xbox One S deal bundles a massive range of Gears games in on an even better price tag. For just $223, you can pick up the full console along with full-game downloads of Gears of War 1 to 5 and a one-month trial of the Xbox Game Pass and Xbox Live Gold.
View Deal

Xbox One X 1TB | Star Wars Jedi: Fallen Order | Call of Duty: Modern Warfare | extra controller | $349 at Walmart
Kick things up a notch with this 4K Xbox One X deal - a fantastic $150 saving on the most powerful console yet with Star Wars Jedi: Fallen Order and Call of Duty: Modern Warfare thrown in. You're getting two massive brand new games at this price, and Walmart have even found room for an extra controller as well. You can also pick up this bundle with NBA 2K20 instead of Star Wars if that's more your thing.
View Deal

Xbox One X 1TB | Gears of War: Ultimate Edition Bundle | $349 at Best Buy
It seems Black Friday has all but wiped out stock of the Gears of War Ultimate bundle. This Xbox One X deal offers Gears of War 1 to 5 with the most powerful console Microsoft has ever released, and you can save $150 this week at Best Buy.
View Deal

Xbox One deals in the UK

Xbox One S 1TB all digital | 3 games | £149 at Amazon
If you're looking to take advantage of Game Pass, or simply want to save the most money you can this holiday season, this Xbox One S All Digital Edition deal is the one for you. For under £150 you're taking home a current-gen Xbox console with Minecraft, Sea of Thieves and some Fortnite DLC thrown in for good measure. This is the all-digital version of the Xbox One S console, so you won't be able to play discs.

Xbox One S 1TB | Star Wars Jedi Fallen Order | 2x games | £179 at Currys
An Xbox One S deal with Star Wars Jedi: Fallen Order, Project Cars 2, and Tekken 7 - all for just £179 this week. That's a deal hunter's dream. Stock's still going strong on this particular Xbox deal so even if you're not particularly enthused about those two extra games you're getting one of the best bundles out there right here.

Xbox One S 1TB | 4 Gears games | Gears 5 | £199 at AO
This Gears 5 bundle comes with all the Gears goodness you could ask for. As well as the brand new Gears 5 game, you'll also get full downloads of Gears of War Ultimate Edition and Gears 2, 3, and 4. There's also a free month of Xbox Live Gold as well.
View Deal

Which Xbox One deal should you buy?

The Xbox One S is the standard version of the Xbox console. The One S grants you access to the Xbox library and a decent spec worthy of its current-gen standing. If you're looking to play some exclusives you missed this generation, or simply want to expand your collection for the cheapest price possible, now is the time to do so.

The Xbox One X, on the other hand, is Microsoft's most powerful console to date. Running in 4K HDR with Dolby Atmos spatial audio, you're getting a premier gaming experience for your cash. You may be looking to upgrade your One S, or simply grab a beast of a machine straight from the off. The specs inside the Xbox One X make it buttery smooth and mean it can handle intense 4K resolution with fantastic ease, but that's also thanks to its 12GB of GDDR5 graphic memory. You're getting speedier load times, high-performance cooling, and enhanced gameplay with this beast of a console.

If you're after the cheapest way to get into the Game Pass system, or you're just curious to see what all the fuss is about over Halo or Gears of War, the cheapest Xbox One deal you can pick up today is the Xbox One S All Digital Edition. You're paying a meagre price tag for a simple digital existence, but if you think you might like to try some cheap second games later on down the line you might want to think twice.

If you're looking for more of the best Xbox One X prices, we've been scouring the web to find all the bundles you should be looking at. If you've just bought your new console, you might also want to check out the best Game Pass deals or the best Xbox Live Gold prices around.