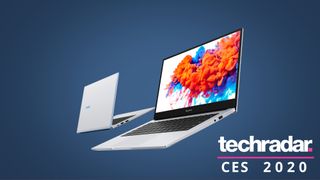 Honor showed off its new MagicBook laptops with AMD processors at CES 2020, confirming a global launch in Q1 for the devices.

The latest version of these laptops – which first emerged in 2018, aping the MacBook Pro somewhat (certainly with the name, but without the premium price) – comes in 14-inch and 15.6-inch flavors with AMD Ryzen mobile processors.

Although we’re not talking about the new Ryzen 4000 series unleashed at CES. Instead, the MagicBook runs with a previous gen: you get a choice of Ryzen 5 3500U or Ryzen 7 3700U.

That’s true of both MagicBook models, which come with integrated Vega graphics, up to 16GB of DDR4 system RAM, and a choice of either a 256GB or 512GB PCIe SSD. Both displays are IPS and run with a Full HD resolution, too.

The main differences are obviously the screen size, and also the size of the battery – with the smaller 14-inch device having a considerably bigger 56Whr power pack, oddly enough, compared to 42Whr in the larger portable. The smaller laptop is more compact and lighter (1.38kg versus 1.53kg), as you would expect.

The 14-inch notebook also has a pop-up webcam.

Other benefits for both models include a fingerprint sensor which is integrated into the power button, and a USB Type-C port which supports charging (Honor further notes that you can charge up to almost half capacity in 30 minutes).

Pricing hasn’t yet been confirmed, but as mentioned at the outset, these laptops are set to be introduced globally during Q1 (and are already out in China). They should be competitively pitched, though, going by past form for the MagicBook.