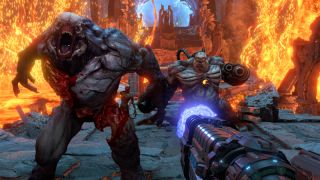 Doom Eternal may have been delayed for us mere mortals. But if you're rap royalty, you can already get your hands on a pre-release of the game.

And so, courtesy of producer and rapper extraordinaire T-Pain, he who popularised the use of autotune in modern pop music, we've got two hours of in-game footage of Doom Eternal to enjoy.

Check it out in the Twitch stream embedded below:

The majority of the video focuses on areas we've already seen in Doom Eternal developer ID Software's promo clips and play-throughs, but it's interesting to see a (relatively) average gamer get their hands on the new mechanics.

And it seems T-Pain's $35 million fortune affords him plenty of time to flex his trigger finger, as the musician is actually pretty good, blasting through hordes of inter-dimensional demons.

As for when you'll be able to get your hands on Doom Eternal, it'll hit PC, PS4, Xbox One and Google Stadia on 20 March, 2020, following a delay that pushed it back from late last year. We wouldn't be surprised if it eventually finds itself ported onto PS5 and Xbox Series X, too.