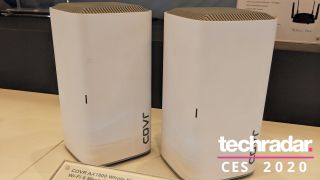 D-Link is showing off a whole load of fresh products at CES 2020, including new routers featuring mesh technology and Wi-Fi 6, along with some nifty next-gen security cameras.

One of the most interesting revelations is D-Link’s COVR-X1870, a mesh Wi-Fi system which offers dual-band AX1800 coverage of up to 550 square meters (which is impressive given that this is achieved with just a two-pack of devices – it’s actually almost a third greater coverage than a three-pack of Google WiFi).

Each unit comes with four Gigabit LAN ports and a Gigabit WAN connector, and supports Wi-Fi 6, with 128-bit wireless encryption, and some neat built-in features including an Ookla internet speed test and profile-based parental controls.

As ever with these mesh systems, you can add another device at a later date if you want to expand your Wi-Fi coverage.

Other router highlights include D-Link’s DIR-1950 MU-MIMO Gigabit Wi-Fi Router, a dual-band AC1900 device which is Wi-Fi EasyMesh certified for easy setup and self-management capabilities, and supports WPA3 on the security front.

D-Link also has the DIR-X1560 Smart Wi-Fi 6 Router which benefits from a 3-core processor, and offers dual-band AX1500 Wi-Fi with OFDMA and MU-MIMO. This device also has a built-in Ookla internet speed test.

These products are expected to emerge in the first quarter of this year, although the X1870 won’t be here until Q2, and there are a bunch more routers in the pipeline.

Furthermore, D-Link took the wraps off new 5G hardware, including the DWP-1020 5G NR Outdoor Unit. This is a wall or pole-mountable outdoor access point which features a 5Gbps Ethernet port (with Power over Ethernet) and a SIM slot, and is waterproof (IP45 certified). The unit supports 5G NR Sub-6GHz and mmWave, D-Link notes.

D-Link also ushered in a new generation of mydlink security cameras, which benefit from clever AI chops and edge-based person detection (meaning they can more accurately detect people, as opposed to, say, the neighbour’s cat in your garden).

The camera is IP65 weatherproof and benefits from a 400 lumen LED spotlight, as well as infrared night vision. You get a speaker and siren, with two-way audio capabilities, and the DCS-8627LH is fully Alexa and Google Assistant compatible so you can use voice commands to turn off the spotlight or siren. Pretty nifty.

Other cameras revealed included the DCS-8000LHV2 Mini Full HD Wi-Fi Camera, which as the name suggests is a compact security camera. It delivers 1080p footage at 30 frames per second with a field of view of 138-degrees.

That was shown off alongside the DCS-8526LH Full HD Pan/Tilt Pro Wi-Fi Camera which offers 340-degrees of panning and 105-degrees of tilt, with a 360-degree horizontal view and auto-motion tracking.

As mentioned, all of these cameras benefit from edge-based person detection, and are compatible with Alexa and Google Assistant, plus they can be remotely accessed from anywhere.

The cameras will be available later in Q1 of 2020, all except for the DCS-8000LHV2 which is actually out now.