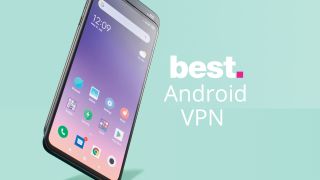 Google's Android operating system has the largest installed base of smartphones around the globe with more than a billion daily active users – so it’s no surprise that there are a lot of VPN apps which support the OS.

Most of the best VPN providers have dedicated Android apps for Pie, Oreo and more, while a smaller number let you set up their network via manual configuration – although, of course, some offerings don’t have mobile support at all.

A word of warning: make sure you avoid the dodgy ones on Google Play as quite a few free players promise to provide free privacy but don't mention the strings attached. Instead, go for one of the brilliant Android VPN apps that we've listed below.

Our top picks for best Android VPN apps are

There are many things to like about ExpressVPN for Android. The dedicated app is extremely user-friendly and straightforward, but also offers lots of advanced options. It has some neat options like an excellent location picker, insecure network detection and (finally) a kill switch to improve privacy and security. Indeed, on the security front, it boasts AES 256-bit encryption, while the speeds we witnessed using the VPN were consistently fast.

ExpressVPN provides quality apps for a wide range of devices, and Android is no exception. The Android app provides access to high speed servers across 94 countries and is compatible across phones, tablets, Kindles and Android TV boxes. What's more, the app is now available in a mix of 12 languages.

After signing up for an ExpressVPN subscription, the website will provide instructions to install the app on your device (usually via Google Play or through an APK file). The website also features a wide array of handy content and video guides on using their apps, as well as 24/7 customer support by live chat in case you run into any issues.

ExpressVPN is definitely not the cheapest VPN out there, but it may be worth the price for those who want the best Android experience. The 30-day money-back guarantee lets you test Express with reassurance.

ExpressVPN offers three price plans, with the 12-month plan offering the biggest saving as you would expect (you get an extra three months). The packages available are:

Get the best Android VPN 2020: 49% off plus 3 months FREE
You can tell that we really rate the ExpressVPN app - it's the VPN we'd choose if we were getting one. And the good news is that TechRadar readers can get a little perk when they sign up, too. ExpressVPN has agreed to give readers three months extra free when they sign up - and don't forget about the 30 day money back guarantee, too.
View Deal

A good mix of speed and security

Switzerland-based VPN provider VyprVPN offers an excellent Android VPN. There’s a dedicated app that is extremely well optimized, and it offers multiple protocols including OpenVPN, L2TP/IPsec, PPTP and Chameleon, the latter being the firm’s own tailored solution. Performance is impressive overall, and we saw some particularly good download speeds.

Our reviewer was effusive in their praise for the Vypr Android solution. Clear interface, kill switch, auto-connect for untrusted network, DNS options, protocol switching, URL filtering. And the list went on. While some other VPNs feel make the Android app feel like a bit of an afterthought, Vypr has really focused on producing an a-class app.

The pricing options are as follows:

The NordVPN app is hugely popular with 5 million+ downloads, and a high Google Play rating. And it has some notable strengths including ‘Double VPN’ technology which passes your connection through two separate VPN servers, as opposed to just the one, for an extra layer of security (there are only a certain number of Double VPN servers, though). NordVPN also has a ‘zero logs’ policy, meaning it doesn’t track the user’s online activity.

While the focus is clearly on security and privacy, NordVPN doesn’t lack in other areas. The Android app is easy-to-use, but pretty basic and lacks configuration options (also, no kill switch), with the desktop app having a much better interface. However, it has some nice features like the ability to automatically connect to NordVPN whenever you join a Wi-Fi network. The performance was good, although nothing spectacular. The app also provides a live chat feature for 24/7 customer support.

Always looking to improve, we note that Nord's Android app has added a custom DNS server and also let's you utilise OpenVPN TCP rather than UDP. Not groundbreaking improvements granted, but may be a nice added bonus for more experienced VPN users.

NordVPN is reasonably priced, too, and has a 30-day money-back guarantee if you just want to give the app a try before you commit. The limited 3-year offer is clearly the best choice in terms of overall value. The packages available are:

Best balance of performance and price

PIA's Android app is easy to use with an abundance of options and settings you can tweak. It's missing the neat favorites system that some other VPN providers have, but there is a whole bunch of other features. You have port forwarding support, proxy support, UDP and TCP protocol settings, you can define local and remote ports, choose custom encryption and handshaking methods, even vibrate the handset to indicate when you're connected. You also have auto-connection whenever you join a VPN and a kill switch.

As mentioned, the app is quite simple to use, with a big on/off button at the middle of the screen, and the region/IP address at the bottom. The performance was no slouch either, and the privacy policy is favorable too.

While there is no free trial, the subscription is fairly affordable no matter what plan you choose. Obviously, the 2-year plan gives you the best savings and you also get three extra free months. The packages available are:

The IPVanish app is good overall with some unusual (but great) options, like obfuscation or split tunnelling. And it's finally added that previously missing kill switch, a standard feature which instantly shuts down the internet connection in the event the VPN drops (to prevent your true IP from being revealed).

There were some seriously impressive download speeds achieved during our testing. Furthermore, there’s no logging of the user’s activity here, plus you get 256-bit AES encryption with the OpenVPN protocol, along with 24/7 customer support.

However, the price might be the one negative element which drives folks away. There’s no free trial, although three available plans come with a 7-day money-back guarantee. The 1-year subscription is the best and most popular choice when it comes to the three packages which are available:

How to choose the best Android VPN app

There are more than enough VPNs with great Android support. Ultimately, which one you choose might come down to some smaller details or personal preferences. When determining the greatest VPN for Android, you need to look out for a few things.

Obviously, a dedicated Android app helps to make things as hassle-free as possible. Next, it should be user-friendly and yet offer enough options to allow for some tweaking (particularly for more experienced users).

Other considerations are tight security, and of course a privacy policy and terms of service which are easily understandable, making it clear what logs and details are kept by the provider. Supported simultaneous connections and the subsequent speeds you can achieve with the VPN are also important, but not vital in this case.