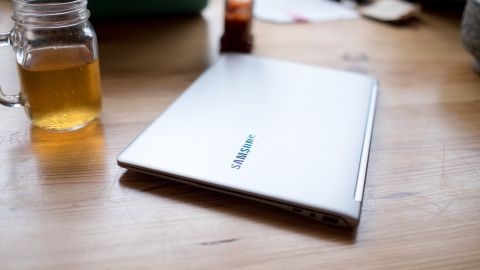 This cost and weight conscious 13-inch Ultrabook will wow you with its slender frame and gorgeous screen, but the short battery life is cause for concern.

Samsung has been a sleeping giant in the notebook world. Sure, it has had a couple of standout Chromebooks and premium Windows laptops, but only recently has it found its groove with a more affordable Surface competitor (Galaxy TabPro S).

Now, the Samsung Notebook 9 seems poised for another big win for the company in the Ultrabook space. Weighing less than most tablets - let alone the MacBook Air - this 13-inch laptop also offers a decent chunk of storage, Full HD screen and Intel Core i5 processor power at just $949 (about £649, AU$1,247).

It's not as affordable as the thrifty Asus ZenBook UX305, but the Notebook 9 is one stellar entry-level Ultrabook.

If you've seen a Samsung laptop in the last four years, the Notebook 9 will look familiar. Prior Notebook Series 9 owners will notice this 13-inch Ultrabook apes the design Samsung introduced in 2012 with the Series 9 notebook.

With both machines sharing the same name, this is arguably part homage and part "Why fix a design that already works?". Though some notebooks like the HP Spectre 13 and Lenovo Yoga 900S are just now becoming stunningly thin, Samsung did it first.

Like other Samsung products, the Notebook 9 is all about curves. Eschewing hard edges, you'll find a slightly rounded lid and a rolling slope that extends from hinge to the depressed keyboard deck before rising again to meet the slightly raised palm rest.

The only hard right angles on this laptop are found on its edges, which form a defined spine that wraps around the periphery. But even then, this sharp angle gives way to a sloped underside, making it seem as if the Notebook 9 is thinner than it actually is.

Not that this notebook needs any niptuck trickery.

The Notebook 9's featherweight chassis can be attributed to its magnesium and aluminum build. Most premium laptops like the MacBook Air and Asus UX305 come etched from an aluminum block, but magnesium affords Samsung's Ultrabook the same level of quality at a fraction of the weight.

However, most magnesium spun notebooks like the Lenovo LaVie Z and LG Gram 15 can feel a bit plasticky. Samsung has countered this by sprinkling enough aluminum into the mix to make the Notebook 9 feel solid and rigid.

The only flimsy area that has me worried is the squishy lid, which depresses easily due to a noticeable air gap between the screen lid and the display itself.

Laptops like the HP Spectre 13 and MacBook have sacrificed ports in the name of ultrathin and feather weight builds, but Samsung has made clever use of space to retain full-sized ports. You'll find a USB 3.0 port where the Notebook 9's svelte form thickens to a more curvaceous rump.

What's more, the Notebook 9 features a SD card reader, which is a rarity for devices this thin. Most rivals like the Surface Pro 4 support microSD as a disappointing alternative or, worse, omit the card reader entirely.

I love Samsung's implementation for the SD card reader, too. A small flip-up flap conceals the SD card reader while helping to maintain the Notebook 9's slender form. It's a smart inclusion when other notebooks have simply compromised their own aesthetics to make room for interfaces.

Unfortunately, Samsung couldn't find the room to add full-sized versions of everything. HDMI, VGA and DisplayPort are all available on this 13-inch laptop, but you'll have to purchase a new set of cables to work with the micro-sized connectors.

On top of full-sized USB 3.0, the Notebook 9 also features a spacious keyboard replete with a massive glass trackpad. Unfortunately, travel feels a little on the short side, but you get a nice, crisp click when you bottom out the keys.

The keyboard also features a unique, but inoffensive teal-green backlight. It stands out from the crowd of white-backlit keyboards on Ultrabooks like the Dell XPS 13 and Lenovo Yoga 900. The display also tilts back to a full 180-degrees, so you shouldn't have any problems finding a comfortable typing angle.

Just below the vibrantly colored keyboard, you'll be treated to a large trackpad that spans across a decent chunk of the keyboard deck. Aside from the roominess, you'll love the touchpad simply because of how smooth it is.