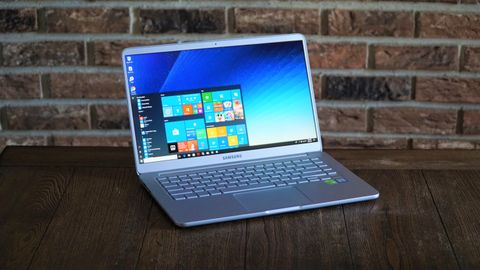 The new 15-inch Samsung Notebook 9 suffers from a squishy keyboard and a small amount of storage for its price, but it might be just the perfect laptop for a specific person: someone that prioritizes lasting power and performance above all else … and can get used to that keyboard.

The Samsung Notebook 9 (2018) is a complicated device, much like other laptops like it. On one hand, it has some frustrating limitations that stop it from becoming truly great. On the other, those shortcomings are generally outweighed by the huge benefits it actually brings to the table.

For example, the Samsung Notebook 9 (2018) has a squishy keyboard and small SSD, both of which do hold it back. However, it’s also fitted with a long-lasting battery and fast hardware. As a result, it has this balance of compromises and features that make it an excellent choice for the right kind of user.

If you’re someone who values battery life and raw horsepower over anything else – and can get used to a mushy keyboard – then Samsung Notebook 9 (2018) might just be the ideal laptop for you.

Here is the Samsung Notebook 9 (15-inch) configuration sent to TechRadar for review:

Both models of the Samsung Notebook 9 tout Full HD displays, Thunderbolt 3 ports and a fingerprint sensor for Windows Hello login. However, there’s only one color option – you’ll get the same “Light Titan” finish on either model. So, the Samsung Notebook 9 hasn’t changed much this time around, at least beyond the obvious upgrades to processing and graphics power.

Starting at $999 (about £719, AU$1,299), the brand-new Dell XPS 15 easily outshines the Samsung Notebook 9 when it comes to value, offering half as much RAM but far more powerful Nvidia GTX 1050 graphics and a 128GB SSD + 1TB HDD combo storage solution behind an FHD display.

Not that we’re complaining: Samsung has an awesome laptop design approach. The Samsung Notebook 9 is flat where it needs to be, featuring only the essential amount of curves – this laptop radiates understated luxury throughout its silvery aluminum frame.

The Samsung Notebook 9 comes in just under 3lbs and is only 0.61 inches thick, making it one of the most compact and lightweight 15-inch laptops we’ve ever tested. That said, there’s one part of the chassis we’d have preferred were a little better.

The most glaring flaw is in its keyboard which, while spacious and deep in travel, is awfully squishy feeling when it comes to feedback. It’s definitely not the crisp, punchy experience we’re used to on laptops in this price range, though admittedly it doesn’t impact your time using it – just get ready for a learning curve. It’s up to you whether some of the laptop’s other major benefits outweigh this drawback.

Also, we found the keyboard backlighting to be awfully weak, not appearing much brighter than a glow-in-the-dark sticker and similar in hue. At least, the keys are well-spaced, and leave room for a fantastic fingerprint sensor and touchpad.

The touchpad on this laptop is coated in glass like before and offers up superb palm rejection in that it not once triggered mouse movements while typing. Meanwhile, the fingerprint sensor is snappy to set up and very responsive in action – all laptops should provide this feature.

Unsurprisingly, Samsung’s FHD display in use here is excellent, offering vibrant color reproduction through its LED panel. Reds absolutely pop while blacks all but disappear into the screen’s bonding.

Unfortunately, the Samsung Notebook 9’s true brightness potential is hidden behind an outdoor mode within the Samsung Settings app. This increases the screen’s maximum brightness of 350 nits by another 150 to give a max brightness of 500 nits, putting it in league with the MacBook Pro.

The fact that the Samsung Notebook 9 display is incredible isn’t surprising, knowing the manufacturer – just turn that Outdoor Mode on when watching Netflix, and you’ll have an immersive time. Plus, you’ll be happy to know that this settings app also boasts a blue light reduction mode so you can make those 500 nits easier on the eyes.

As for the audio, we’re sad to report that it sounds about as thin and tinny as you’d expect from small, down-firing speakers. This is one place worth looking at for Samsung in terms of refining the 2019 model.