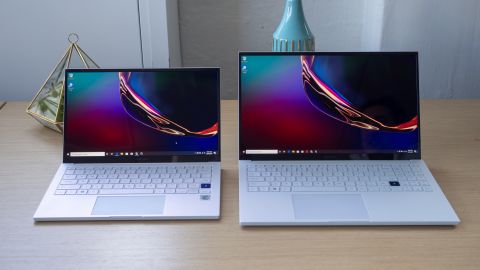 Samsung is making some wild promises with its Galaxy Book Ion line of laptops, namely 20 hours of battery life with QLED displays. But, is that enough to be excited for laptops with no firm price or release date? Not really, but they’re at least more interesting than Samsung’s Flex flagship laptops.

Samsung hopes to inject some life into its line of laptops, throwing out the “Notebook 9” name for one closer to its acclaimed phone devices. This is clever for sure, but can a new moniker redeem Samsung’s less-than-stellar laptops?

Not in the slightest. Knowing this, Samsung has introduced some truly unique – if poorly implemented at times – technologies, namely brand new QLED displays and wireless device charging.

This marks the first time that QLED displays have made it to mid-range laptops much less wireless device charging, which should elevate the new Galaxy Book Ion line above some key competitors. These new, traditional laptops surely impress at first glance, but their worthiness all depends on price.

Unfortunately, Samsung is not disclosing any pricing or release date information at this time beyond that these laptops will be released in early 2020. Naturally, this makes any criticism or accolades difficult to lay upon these products.

Being budget renditions of Samsung’s new flagship Flex platform, these laptops house much of the same hardware save for a few key differences. For starts, both the 13.3-inch and 15.6-inch versions of the laptops will feature 10th generation Intel Comet Lake Core processors (CPUs), meaning they’re still 14-nanometer (nm) chips compared to the 10nm ones inside the Flex laptops.

From there, both laptops support up to 16GB of DDR4 memory (RAM) and up to 1TB NVMe solid-state drives (SSDs). Also, both laptops feature 1080p (1,920 x 1,080) QLED displays, 720p HD webcams, Wi-Fi 6 connectivity, fingerprint readers on the keyboard deck and the same array of ports: one Thunderbolt 3, two USB-C 3.1, HDMI-out, a MicroSD slot and an audio jack.

The biggest difference between the 13.3-inch and 15.6 inch models, aside from the display size, is that the latter has the option for Nvidia GeForce MX250 graphics, one more SODIMM for expandable RAM and an additional SSD slot that supports up to 1TB more storage.

Samsung is taking a much more streamlined and basic approach to the Galaxy Book Ion design, stripping them of any 2-in-1 laptop features, namely the touchscreens and 360-degree hinges. However, Samsung made a particularly appreciable change to its traditional clamshell design: what it calls the “Book Hinge.”

The company can call this feature whatever it wants, but ultimately this is the ErgoLift Hinge that Asus introduced to laptops some two years ago now. This elevates the typing angle of the keyboard and makes additional room for air cooling – it’s nevertheless a brilliant feature, but it’s far from original.

Samsung is also pushing its more affordable laptops as ultra light, and it shows: the 13-inch model weighs in at 970g, while the 15.6-inch version weighs 1.19kg to start. The laptops measure 12.9mm and 14.9mm thin, respectively, which matches the Flex models exactly.

The laptops come in a gorgeous-looking “Aura Silver” color magnesium frame, which changes hue a bit depending on the angle you’re looking at it from. This is similar to Samsung’s latest flagship phones, but less pronounced.

We love the feathery weight of both laptops, admittedly, and appreciate the color treatment. More importantly, however, we adore the keyboards on both models. The keyboards on the Galaxy Book Ion are both quieter and punchier than the Flex models, oddly enough. The touchpads are equally impressive in terms of response and accuracy.

Plus, these touchpads also feature Samsung’s wireless power delivery technology. The feature works without a hitch, if a little ill-conceived: undoubtedly no other laptop maker offers such a feature right now, but this also can only be used when you’re not actively using either device given the placement. A scenario in which you’re not on your phone or your laptop is not common at all these days.

As for the screen, this follows suit from the Flex line in adopting Samsung’s QLED technology, bringing its flagship TV display tech to mid-range laptops. This is no doubt one of the most rich laptop displays we’ve ever seen, even at 1080p. However, we’re sure a higher resolution would do these displays that much better.

Colors are deep and vibrant on the QLED screen, which should please the media nuts out there. If that doesn’t do it for you, Samsung promises better legibility in any lighting environment, with up to 600 nits (!) of brightness. (This will surely be a blow to battery life, but as to how much we’ve not been told.)

It’s tough to list anything more than expectations of power when it comes to a hands-on review, but we do know what will be inside these laptops. Intel Comet Lake carries on the chip maker’s storied 14nm process, iterating for what seems the umpteenth time.

With that, we expect rather slightly better performance than CPUs released earlier this year in the likes of the early 2019 Dell XPS 13. That’s fine for just about any type of user, but these should surely be cheaper than any laptop featuring Intel’s 10nm Ice Lake chips inside.

Samsung is promising up to 20 hours of battery life from either version of the Galaxy Book Ion, which makes little to no sense to us, as both house the exact same battery. Also, this promised figure is out of this world. Not even the new Pixelbook Go – widely agreed to be a battery marvel – comes close to this.

The Samsung Galaxy Book Ion line of laptops are in ways much more interesting than Samsung’s Flex laptops. They’re no-nonsense mobile computers with much of the same panache of the company’s flagships without the fluff of touchscreens and flexible hinges.

However, a lot of what Samsung is promising from these laptops, namely battery life, just doesn’t make sense. We also would love to see more care taken in the 15.6-inch version of the laptop, rather than it just be pushed as a larger screen with a number pad – more ports and better speakers would be appreciated, to start.

It’s difficult to come down too hard on these laptops one way or the other, knowing little to nothing about their price and release timing, but we’ll say that these laptops are more likely to impress us than Samsung’s upcoming flagship 2-in-1 devices.