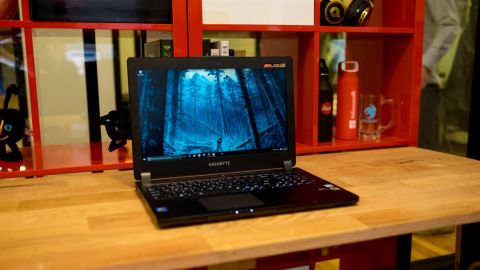 Light on weight and price, this 15-inch gaming laptop features plenty of power without the bulk – though, a few aesthetic missteps blemish this otherwise spectacular machine.

The Gigabyte P35X v5 is a mighty powerful, 15-inch gaming laptop equipped with a 4K display, Intel Core i7 CPU and Nvidia GTX 980M with 8GB of video RAM. With such impressive hardware under the hood, you might have assumed this machine was just another thick performance beast.

However, the P35X is actually slimmer than your average 15-inch laptop, all while looking a bit duller, too. While this laptop won't turn heads with a gorgeous frame, it's a downright demon when it comes to 4K gaming.

For a gaming laptop, the Gigabyte P35X v5 is surprisingly unremarkable looking. In fact, the 15-inch notebook appears rather formal, donning a simple black paint job with an anodized aluminum exterior covering the screen lid and keyboard deck.

The underside of the machine is disappointingly made of plastic instead of metal, which would help disperse heat better. But at least it's not visually obvious and, despite being made of two differing materials, the P35X feels solid throughout and doesn't creak under pressure.

The thing you'll notice most about the P35X is how stunningly thin and surprisingly light it is considering its fully-loaded spec sheet.

Unfortunately, to get this machine to such a level of thinness, Gigabyte had to make a few compromises. Most notably, the P35X v5 has a considerably larger footprint than most other 15-inch laptops.

The rear of the notebook's base extends past the edge of the screen, to make room for larger heat radiators. Similarly, the palmrests are also oversized, which gives your hands more room to sit on the keyboard.

As a consequence, though, the extended depth creates a one-inch gap between the trackpad and the front edge of the laptop. You have to reach with your fingers to use the pointing device, and you'll often trigger the mouse buttons when you just meant to move the cursor.

Its likely Gigabyte couldn't move the trackpad any closer to the front edge because the optical drive resides just below it. Which begs the question; why not just ditch the DVD drive all together?

If the P35X v5 is designed to be as slim as possible, getting rid of the optical drive could either help make this machine even more compact or make more room for other components.

With this in mind, you should bring along a portable or dedicated gaming mouse, as the trackpad is only good enough to use in a pinch. While you're using your mouse, you might notice that the power cord is annoyingly in your way, as the connector is inconveniently placed on the right side.

Luckily, the fully-backlit keyboard offers a satisfyingly clicky typing experience, even if the key travel is a little on the short side by gaming laptop standards.

Next Page Specifications and Performance