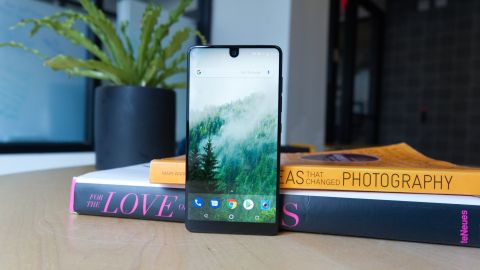 From a design standpoint, Essential’s PH-1 is a bold first move. It offers a stock Android experience and looks like no other device out there, but so far, the company has come up short on its promises.

For a brand with no track record of making smartphones, the Essential Phone was an intriguing first attempt.

It went for the long game by offering a phone that, in theory, doesn’t have to be tossed aside, trashed or traded in after just a year of use.

Part of that comes from its timeless design that signifies that it belongs in tomorrow as much as it does today. Another fork of that stems from Essential’s plan to bring many modular accessories to the phone, thus expanding its capabilities as the months go by.

The PH-1, as it’s officially called, makes clear that it isn’t "just another Android smartphone." But in its efforts to stand out as something essential for today’s innovation-starved audience, the offering here couldn’t be more refreshing – or divisive.

It’s a confident melding of glass and ceramic that seems rather basic in what it’s trying to attempt, but it’s hiding a few tricks up its sleeve. For those with small hands, the amount of screen that Essential has packed into the compact package is astounding.

Speaking of the nearly bezel-free display, it’s one of the phone’s big conversation-sparking features. Its pairing of design and software also rivals Google’s own smartphones. But for something that claims to be “essential” at launch, it presumes a hell of a lot about its audience: that for every desirable feature the PH-1 contains, which there are certainly a few, you hopefully won’t notice that it’s missing many must-have features.

Things like waterproofing, expandable storage, wireless charging and a 3.5mm headphone jack are essential to many, but nowhere to be found here. Oh, and its modular accessories? You’ll just have to trust that the company is committed to bringing more down the line, as its debut 360-degree camera accessory took longer than expected to release.

For all that the Essential Phone does right, it’s rather short on reasons to back up its high $699 price tag (no UK price confirmed at this time) compared to the seriously intimidating competition it put itself up against: the iPhone 8, Samsung Galaxy Note 8 and Google Pixel 2, just to name a few.

However, thanks to its brilliant, timeless design, plenty of power, and the promise of modular accessories, the Essential Phone is an Android phone that will only get better with time. That is, if you’re patient enough to watch it grow.

Curious about Android Oreo? Oreo 8.1 is now available after a long beta period.

The Essential Phone originally debuted in the United States starting at $699 unlocked. It then look months to venture to other countries such as the UK and India.

Essential then dropped the price of the phone to only $499, which makes it far more affordable than it was at launch.

However, at the end of 2018 Essential had confirmed it was no longer making the phone, and thus if you're looking to buy one now, you may have to act fast as stock will be limited.

The Essential Phone is a feat of engineering in that it somehow manages to fit a 5.7-inch 2,560 x 1,312 display into a chassis that’s not much larger. Stacked up against the Google Pixel XL, the it’s roughly the same size in the hand, but there’s so much more screen here.

Essential has taken bezel reduction to a new level. You’ll find a rather small bezel “chin” on the bottom of the phone, but the screen nearly spills over the top of it, where you’ll find the selfie camera. This feat is all the more impressive because the LCD display wraps around the front-facing camera instead of shoving it to the bottom like Xiaomi Mi Mix. That phone’s “nostril camera”, as Essential’s Andy Rubin calls it, makes for awkward selfies.

Essential opted for a titanium frame, which it claims offers much higher durability (and heft) compared to the oft-used aluminum we see in many smartphones. This means, theoretically, it shouldn’t break or bend under circumstances wherein most phones do. On the phone’s outside, Essential covered it all up in ultra-glossy ceramic, which looks fantastic and feels cool to the touch, but is oh-so inviting to your fingerprints.

Around the phone’s edges, Essential has cleverly implemented a grippy material that doubles as its antenna passthrough. While you won’t find a 3.5mm headphone jack on this phone (Essential provides a USB-C to 3.5mm converter in the box), the usual assortment of volume rocker, power button and USB-C charging port make their appearance here. The tactile buttons are simple to find and have a nice click to them.

The backside of the phone is as flat as the front and is so devoid of any markings that there's not even an Essential logo anywhere on the device. It’s a way of Essential saying “this isn’t our phone, it’s your phone.” On our way up, there’s a fingerprint sensor in an easy-to-reach location, flanked on its top by a dual-lens camera, flash and Essential’s accessory connector ports, the latter of which we’ll touch on below.

Essential's "Pure White" color variant is also now available, bringing the options to two: black and white. We're still waiting on the third and fourth colors, "Stellar Grey" and "Ocean Depths", but until then, at least there's an option available that doesn't show so many fingerprints.

Check out some hands-on photos of the black and white variants below.