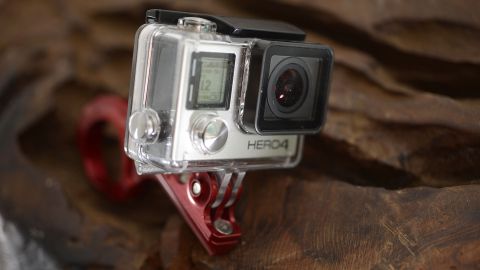 The GoPro Hero4 Black brings a major step up in video performance and some useful improvements to the design and control interface too.

The action camera market is expanding at blinding speed, and the best known name in this sector is GoPro. GoPro cameras feature extensively at sports events and they're used by broadcasters like the BBC to capture spectacular wildlife footage.

[Update: The GoPro Hero4 is now a couple of generations old and is starting to be hard to come buy if you want to buy new. We recommend you take a look at either the GoPro Hero5 Black or the new Hero6 Black. For our 10 top action camera picks, check out our up-to-date buying guide.]

GoPros and their rivals are 'POV', or 'point of view' cameras – they capture what you're doing, not necessarily what other people are doing, and what has made these cameras so groundbreaking is their small size and high-quality, high-resolution footage – and the characteristic GoPro wideangle 'look'.

This is a camera not much larger than a matchbox which can capture 4K video at an incredible 30 fps (that's the same as the Panasonic GH4).

There's no screen, and no way of checking your composition on the camera itself, but you can connect your GoPro via Wi-Fi to a smart device to check live composition and clips. At any rate, the lens has a 170 degree angle of view so you're unlikely to miss anything.

GoPro cameras have now hit their fourth generation and the line-up has been overhauled with three new models – the GoPro Hero4 Black, GoPro Hero4 Silver and regular GoPro Hero. You can see what's new in our earlier GoProHero4 news story, but it's the top-of-the range Hero4 Black we've got our hands on here.

Other new features include Bluetooth support, not just Wi-Fi, and the ability to tag your best footage as you shoot it.

Aesthetically, the Hero4 Black looks much the same as the Hero3+, with the familiar GoPro box form and dimensions. This means that the standard waterproof housing remains the same and is included with the camera when purchased. But once you start using it you realise there have been a few significant changes to the design which make a big difference.

Some are fairly minor – the camera status and Wi-Fi lights that were on the front before are now two small illuminated slits to the left of the LED screen.

And on the right hand side of the body the old direct access Wi-Fi button now becomes the settings button – and if you hold down for a couple of seconds it will still enable you to toggle Wi-Fi on and off.

This new settings button is part of the overhauled navigation system, which is a vast improvement and actually makes using the camera far more intuitive than the previous version.

Finally, the battery compartment is no longer accessed through the back of the camera. It's now located in the base, and the battery type also changes from 3.7v 1180mAh to 3.8v 1160mAh. More importantly, it's much easier to swap out in the field than before.

As with previous models there's a connection on the back for a screen. On the side under a protective flap are two connectors that enable direct connection to HDMI and USB along with a Micro SD card slot.