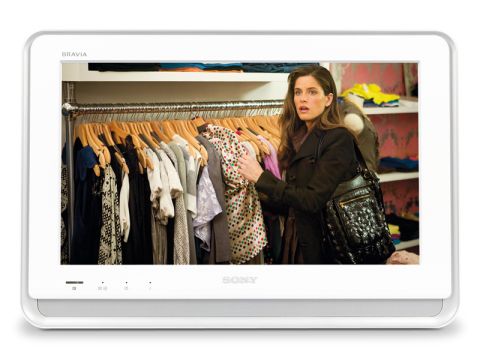 A solid set that offers great pictures and a stylish design

The KDL-19S5700U cuts an immediate dash with its unusual stand-free design, subtle curves and recesses and a smart white finish.

The elegant lines are slightly undermined by a green digital display of the sort normally found beneath large 'snooze' buttons, but the general effect is striking where most of its rivals are either plain boring or rather kooky, and it's easily one of the most well-made televisions of its size.

And if it's only arguably the most stylish set, it's certainly the best connected, boasting a brace of HDMIs and a USB port to its credit, as well as both analogue and digital audio outputs and two RGB Scarts.

The television is reasonably easy to install, and combines fast and efficient channel scanning for both the digital and analogue tuners with a pleasing graphical system that's operated by an ergonomically sound remote control.

Pictures, meanwhile, are very good, eclipsing the LG 19LH2000 and coming in probably second only to the Panasonic TX-L19X10BW. Colours are natural and frequently delicate and nuanced.

Black levels are passable and the amount of detail on display is impressive, with the KDL- 19S5700U making better use of its HD Ready panel than most sets of this size.

Motion is occasionally a trifle suspect, with the odd hint of wobble or judder, but this is one of the most persuasively cinematic, 19-inch sets we've seen.